Some new upcoming features have been hinted for Animal Crossing: New Horizons from datamining in the latest Fall Halloween Update, including new types of furniture and villager interactions!

Once again, the new datamine details in this article have been uncovered by community sleuth Ninji who took a peek into the latest update. As always with any information found in datamining though, the new features discussed here are not confirmed official information and should only be considered rumors.

Back in 2015, Nintendo released a spin-off game called Animal Crossing: Happy Home Designer that exclusively focused on the decoration aspect of the series. That game saw many improvements to Animal Crossing decorating that fans hoped to see in future main series installments like New Horizons. 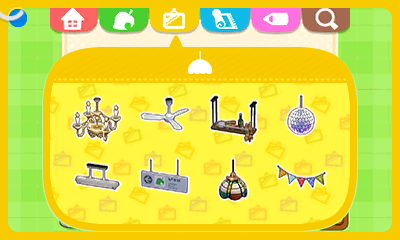 Some of those additions have already come to Animal Crossing: New Horizons, such as the individually placed rugs we enjoy now and even the ability to place furniture outdoors. Yet another feature never did make it out of Happy Home Designer: the ability to attach items to the ceiling of your rooms!

According to new changes found in code for the Fall Halloween Update by dataminer Ninji though, ceiling furniture items may be coming soon to Animal Crossing: New Horizons too.

Previously before Version 1.5, there were detailed entries covering the editing process for items on the floor and walls, such as cRoomEditFloorNear, cRoomEditFloorNormal, cRoomEditFloorFar, cRoomEditWall, and cRoomSelectAccentWall. However, a single lone cRoomEditCeiling entry existed for the ceiling.

While it’s absolutely not a certain signal, we do believe this can point to at least the likely possibility of ceiling items being introduced to Animal Crossing: New Horizons in the foreseeable future — either in the upcoming November Winter Update later this year or perhaps a different update early next year.

Speaking of spending time in our Animal Crossing homes decorating away with furniture, another related feature seems very likely to arrive in a future Animal Crossing: New Horizons update returning from past games.

It’s certainly fun to visit your villager’s homes and see how they’ve been decorating, but what if your favorite villagers could check out your house instead? You don’t have to dream, because that was a feature available in Animal Crossing: New Leaf on 3DS and it looks like it may be coming back soon!

Villagers could find their way into your home in Animal Crossing: New Leaf for a visit in three different ways:

It’s too early to say exactly how the mechanics for visiting might work in Animal Crossing: New Horizons, but some brand new dialogue in Version 1.5 hints that the feature will be coming in some form.

According to Ninji, new dialogue where villagers comment on categories of furniture you have on display in your own house have been added, including an interaction for when a villager spots their own photo portrait item on display in your house.

We’re not aware of any current interactions in Animal Crossing: New Horizons that could possibly produce this dialogue, given that villagers don’t enter your home currently. You could place a portrait outdoors, but we’ve never experienced or heard of villagers commenting on them there either.

i’m not sure why they’re adding to the villager-comments-on-your-stuff dialogue, because I don’t know _when_ it’s used

maybe they’re preparing to finally add villagers visiting you in an upcoming update? versions 1.0 to 1.2 had EventFlow scripts for it, but they hid them in 1.3

Furthermore, Ninji adds that EventFlow scripts for villager visits were spotted back in Version 1.0 to 1.2 during the Spring, but later hidden beginning in Version 1.3 when Nintendo began to improve their efforts of hiding future content.

Taking into account the new furniture dialogue, the event scripts from past versions, and the existence of a home visit feature in past Animal Crossing games… we’re quite certain this is on the way to Animal Crossing: New Horizons soon enough!

Another adjustment in the code for Version 1.5 of Animal Crossing: New Horizons is the removal, addition, and change to various strings that have been discussed before.

According to Ninji, a single reference to Gyroids and unused categories for Sanrio items was removed. On the other hand, the vegetables besides pumpkins we heard about before were removed, but also added in another area.

Additionally, a new type of mysterious bush called Plumeria that Ninji spotted in Version 1.4 has been renamed to simply ‘Plm’, presumably in an attempt to hide it away.

Unlike the ceiling items and villager house visits, it’s hard to draw any definitive conclusions from these changes. In general though, when we’ve spotted the developers messing around with features in the past, they’ve tended to surface eventually.

So we’d say that signs are continuing to point towards Gyroids, Sanrio items, more Vegetables, and possibly a new Bush coming to Animal Crossing: New Horizons at some point. But these still remain more loosely evidenced and shouldn’t be considered confirmed by any means.

Finally, a new assortment of item entries have been introduced in Version 1.5 for non-player characters to hold. The new entries include PBag, Cane, Pkax, Tr, MChart, Fpan, Mcas, FAndK, and CUten.

It’s impossible to say definitively what any of these could mean as Nintendo has deliberately tried to make them obtuse and prevent any such speculation.

But who doesn’t love just a little bit of speculation? Below, we’ll share and list some interesting theories mentioned by fans in the replies to Ninji’s tweet:

Again, the full names speculated above are not found in the datamine and are simply baseless speculation from the codenames. We’re not willing to definitively predict anything off these item names yet — it’s really too hard to say at this point.

It’s worth noting as always that all of the information in this article is tentative and unofficial from investigation of the game’s files — there’s no guarantee that these features will come to fruition or aren’t simply being misunderstood by us.

However, there is quite an extensive proven record at this point for datamined Animal Crossing: New Horizons features to show up in official releases as seen by the Dream Suite and vegetable farming earlier in the year.