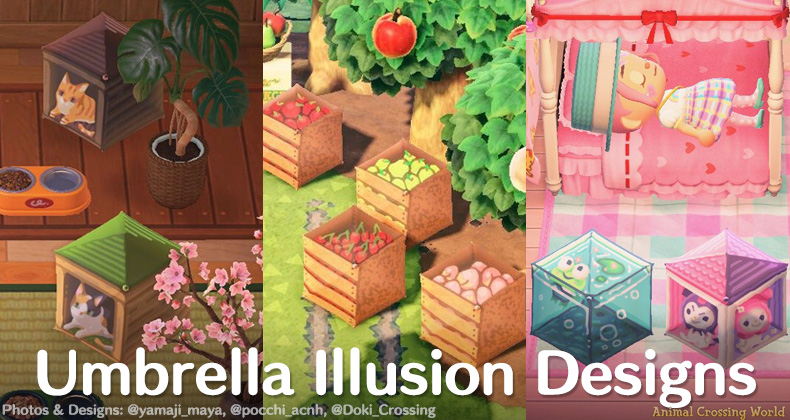 The latest March Update for Animal Crossing: New Horizons has been out for just a few days now introducing Sanrio villagers and items, but this update also added new Custom Design options that are already being used to their full advantage!

But most interestingly, umbrellas created with Custom Designs can be placed directly on the floor as a sort of furniture piece, not just as an accessory to wear.

It turns out that by designing a pattern in the just the right way for the proportions of an umbrella and placing it on the floor with the right rotation, you can create a pretty convincing illusion of a custom furniture item in many forms.

This might take you a minute or so to figure exactly what’s going on — believe us, we were certainly confused at first! Of course, the illusion only works at a particular angle when the umbrella’s handle is properly hidden, but it’s great for taking photos.

Japanese player @yamaji_maya on Twitter appears to have been the first fan to discover and share the technique used to display a cute cat inside a house, but many have followed since with their own spins on the concept.

To some fans, this concept might not seem like a big deal, but the gamechanger here is that umbrellas allow for players to add what appear to be entirely new 3D custom items into their homes and landscapes, rather than simply a new flat pattern.

Below, you can find a showcase of our favourite Umbrella Illusion Custom Designs we found so far in the Animal Crossing: New Horizons community. Feel free to share more in the comments too!

here are the sanrio cube umbrella designs I finished tonight with their codes! 😊💕 they were fun to make and I hope you enjoy 💖 #ACNHDesign #ACNHDesigns #AnimalCrossingNewHorizons #acnhsanrio #acnhcodes #acnhcode #animalcrossing #kidcore pic.twitter.com/G4Xm37xedx

someone do this but better than me #ACNHDesign #ACNH #acnhpattern pic.twitter.com/V0tBFoot50

A GameCube umbrella for you and your villagers to play Animal Crossing on! from ACQR