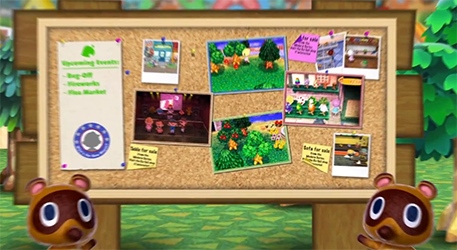 Nintendo has released the third part of the ongoing Tourism Trailer series for Animal Crossing: New Leaf. This time around, the video focuses on the Businesses across the train tracks on Main Street. Check it out below:

Yes, they said Club LOL again, confirmed for both regions.

Nintendo’s annual earnings report for the previous financial year has been released and with that, we now have the latest official sales numbers for Animal Crossing: New Leaf in Japan and South Korea. Keep reading for the details:

A couple days ago, we posted a few new English videos of Animal Crossing: New Leaf from the recent press events held by Nintendo.

We’re back today with another video, which is particularly interesting as it gives us a first look at the second Nookling store and catalog in English. Our Nookling store guide has been updated accordingly. Enjoy!

The final word on the Club 101/LOL debate?

A few weeks ago, there was some controversy over the name of the Comedy/Night Club on Main Street in Animal Crossing: New Leaf. I wrote about how it was likely that Club LOL is a pun on the Comedy Club aspect. Now it seems we may know for sure…

From the recent press event for Nintendo 3DS, we’ve got some new off-screen videos in English of Animal Crossing: New Leaf. Check them out below and be sure to check back later as more videos may be added. The first video is included, continue reading for the rest.

Those who pre-order Animal Crossing: New Leaf at GAME will be receiving an Isabelle figurine and a Town Hall model with her. We’re still waiting on details about whether this pre-order bonus will be offered at other retailers.

I’m hoping that North American retailers will be offering this pre-order bonus soon as well.

Following today’s Nintendo Direct, the official website for Animal Crossing: New Leaf in Europe has gone live. Some of the site is still locked down until we’re closer to release but there’s still plenty to see at the moment. Check it out here.

One thing I noticed while browsing the site is that the Rich Town Ordinance (town law) seems to have been renamed “Bell Boom” in Europe. Check out the screenshot above.