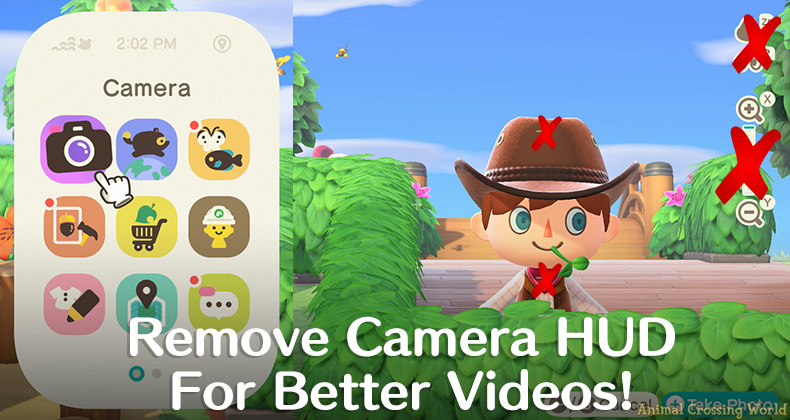 One of our favorite new features in Animal Crossing: New Horizons has been the Camera Mode app feature inside of the NookPhone, but unfortunately the user interface can get in the way sometimes.

Thanks to a handy new glitch that’s been discovered by LuigiOdyssey though, we now have a neat little method allowing us to hide the Camera app’s interface from view, including the controls on the left and right sides of the screen.

Most importantly, the annoying four corners of the ‘viewfinder’ in the center of the screen can be removed as well, which can be pretty pesky sometimes.

UPDATE: As of the Summer Update Version 1.3.0 of Animal Crossing: New Horizons, this glitch appears to have been fixed and sadly no longer works.

Of course, you don’t need to use the Camera app to take a video in Animal Crossing: New Horizons, but by using the Camera mode you can take advantage of all its additional features like zooming, filters, and most importantly walking in and out of the frame off-screen. Now by using this trick, you can do all of the above without any annoying interface in the way!

To try out this sweet Camera mode trick yourself, open up your NookPhone and get ready to select the Camera app. But before you press it, prepare your fingers to press both the A Button AND the + Button at almost the same time. Then try and press the A Button, followed by the + Button just after.

It might take you a few tries to figure out the exact method and nail it down, but once you’ve ‘got it’, it’s easy! In our experience, the best timing is pressing the + Button just a brief moment after pressing A to launch the app. If you do them at the exact same time, it doesn’t seem to work for us.

When you pull this move off correctly, the Camera app will be launched, but there will be no interface in sight! In fact it may appear at first glance that it hasn’t worked because nothing looks different from regular gameplay, but when you move your character using the analog stick, you’ll quickly see that you’re moving while the camera isn’t.

That’s one of the best features of using the Camera app in Animal Crossing: New Horizons, and now you can fully take advantage while recording videos without getting anything in your way. You can also zoom in and out using the X / Y Buttons and adjust the camera positioning using the D-Pad Buttons.

While this trick certainly won’t useful to everyone, I think anyone who’s been enjoying taking fun pictures in New Horizons using the camera app over the past couple months will see a lot of potential in videos that can be created now! The possibilities are truly limitless.

Hopefully Nintendo will choose to implement this into the game as a proper feature soon after seeing it gain popularity, rather than patch it out as a glitch, but either scenario is possible. We’d hate to see it go away even if it’s technically unintended!

Let us know in the comments below if you record any neat video creations using this trick and feel free to leave a link to your tweet showing it off! Perhaps we’ll do a showcase article soon with some of the best videos we see if there’s enough good ones.

Be sure to check out our Animal Crossing: New Horizons Guides page here for more information on the game. (via Akfamilyhome and GameXplain)