Who would have guessed? Animal Crossing: New Leaf is currently sold out across Japan with the initial shipment of 600,000 copies! An additional shipment of 300,000 more copies is expected by the end of this week which will probably sell out too.

Was that not enough? Nintendo has also sold about 200,000 downloadable copies directly through the Nintendo eShop. Clearly retail game downloads are catching on in Japan. Although some of that may be driven by the fact that the game is sold out everywhere at retail.

If you do a little math there, you’ll notice that means Nintendo has already sold 800,000 copies in just one week. All in all, Animal Crossing: New Leaf is definitely doing well in Japan! Who knows, maybe this will push Nintendo of America to hurry things up. (yeah right)

Highlights from an interview with the developers of Animal Crossing: New Leaf

To celebrate the game’s release in Japan, Famitsu sat down with some of the developers of Animal Crossing: New Leaf to ask them about the game’s development. Of course, it was in Japanese but now Polygon has translated the interview and posted some highlights of it.

Here’s an excerpt from the article with sound director Kazumi Totaka discussing the game’s new music and sound effects:

Totaka led up a sound team in New Leaf that came up with so much new original music for this game that he has trouble picking a favorite. Music wasn’t his only focus, though. “We made an effort to program the sound engine such things like the sounds of rivers and insects were expanded upon,” he said. “A game’s sound is about a lot more than just music, after all; sound effects and the code driving it all play equally important roles. Everyone involved keeps piling up features based on what they’re good at, and we create this world together.”

To see the rest of the interview, head over to Polygon.

An unboxing of the Japanese Animal Crossing 3DS XL and more!

Personally, I’m definitely getting the Animal Crossing 3DS XL if it comes to the rest of the world. 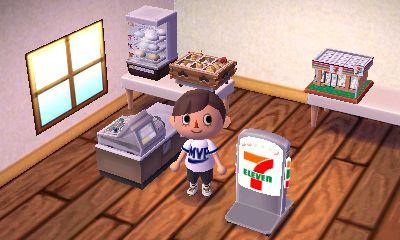 Japan is getting some promotional 7 Eleven furniture in December. These items include a 7 Eleven model shop, a counter with a cash register, and more.

Just bring your 3DS to a local 7 Eleven in Japan to wirelessly receive the exclusive furniture in your Animal Crossing game. You’ll want to come multiple times throughout the month as new furniture will be offered every week.

What are your thoughts on these types of promotions? Does it add to or take from the game’s atmosphere to have outside branded products like these in the game?

Check out an introduction of the first 20 minutes of Animal Crossing: New Leaf below. As always, consider if you may find this spoiling before you watch.

The day we’ve been waiting years for here is finally here. Animal Crossing: New Leaf has been released in Japan and will soon come to the rest of the world in early 2013. Stay tuned to the Blog in the coming days as we report on new information coming from the Japanese release.

P.S: Did you import the Japanese game? Feel free to send any interesting in-game screenshots that you take to screenshots@ac3dsblog.com and we might just feature some on the Blog! Also, check out The Bell Tree Forums to play with others online who have the Japanese game!

UPDATE: The live stream is over, however you can watch a recording below.