In an exclusive interview with Nintendo of America president Reggie Fils-Aime yesterday, he revealed details on an exclusive US feature for Animal Crossing: New Leaf. Keep reading for details…

ACNewLeaf.com: Back in February, you mentioned an exclusive feature would be coming to the US version of Animal Crossing: New Leaf. Can you share any new details on this feature today?

Reggie Fils-Aime: I would love to! We’ve spent a lot of time developing this new feature so I’m really excited to share it with you. In the US version of New Leaf, every fruit tree has been transformed into a brand new tree for the American audience. We really think the fans will love it. 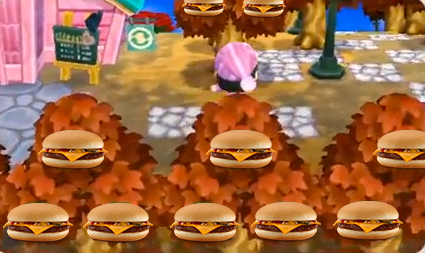 ACNewLeaf.com: Can you share any screenshots on this new feature?

Reggie Fils-Aime: Certainly! I’ve brought a couple screenshots with me today, take a look. I think you’ll be impressed.

ACNewLeaf.com: Wow! These are definitely… interesting. What was the reasoning behind this feature?

Reggie Fils-Aime: Yeah, we’ve replaced every fruit in the game with an entirely new food. We felt this would appeal and sell to the western audience a lot better, it really changes the entire gameplay experience.

ACNewLeaf.com: The development of this feature surely must have taken some time, is this the reason for the delay of the worldwide launch?

Reggie Fils-Aime: We were ready to ship the game in January, but we really felt that it was missing something. I’m sure the fans will understand though once they experience the new additions. That’s all I can say for today, though, I think I can say for certain, the collective body of the American audience is ready.

ACNewLeaf.com: Thanks for your time! Can you tell us anything else?

Well, that’s it for our interview with Reggie Fils-Aime! Leave your thoughts in the comments about this exciting new exclusive feature for Animal Crossing: New Leaf in the US! I’m really excited for the new possibilities this will add to the series.