It was pretty cloudy in Waikiki today, especially in contrast to the previous couple days of a clear sky. You can see my new neighbor Kitt has moved in next door too.

Checking my Bulletin Board, I was reminded of the Bug-Off tomorrow. (yes, that means I’m a week behind on writing these now…)

Over at Nookling Junction, I purchased my daily Fortune Cookie. Today, the prize was a Pipe from Mario! The text for the fortune is pretty clever.

Since I was on Main Street anyway, I checked out the exterior parts at Nook’s Homes. The Barrel Mailbox looked nice and I haven’t had a chance yet to order an exterior part, so I purchased it.

In town, Crazy Redd had stopped by for the day with his tent. The Ancient Statue looks nice, and I didn’t notice any defects on it, so I gave it a chance. 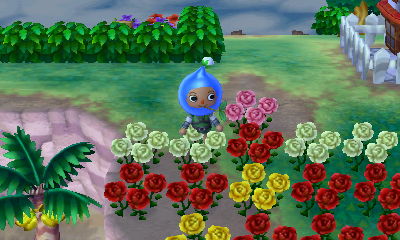 I got another pink rose today. I’m pretty happy with that.

With some help from a friend, I got another piece of the Mermaid series of furniture.

I decided it was time to greet my new neighbour Kitt. I do like her a bit, which is kind of sad because I’ll need her to move out eventually…

I had a funny chat with Opal later. She asked if I believed in UFOs, and well, I wasn’t expecting this…

UNIDENTIFIED ORANGES! All over the floor! How majestic.

We wouldn’t want any rogue citrus…

Earlier in the day, I dropped by Re-Tail to get a customization done by Cyrus. I didn’t take a screenshot but it was an orange and white Astro Dresser. With the power of blue alpaca though, it became red and black!

While we’re at it, here’s a look at how the main room of my house is progressing.

Beau asked me for a cherry, which I was happy to provide. He seemed to enjoy it quite a bit.

For my reward, I earned a ranch tea table. But I didn’t have it for long as…

Right after, Lolly ran up to me and asked to trade for her game shelf. The game shelf sounded pretty swell though, so I went for it. (Beau will never know…)

It’s got a Gamecube on the top shelf, which is really awesome. But I’m not a fan of the pink wood colour, so I put in an order to change it. We’ll check back on it a bit later.

Phineas showed up in Waikiki with another badge to add to my collection! This time around, I got the Insect Maniac badge for catching over 50% of the bugs in Animal Crossing: New Leaf.

Back at Re-Tail, I picked up my newly refurbished Game Shelf furniture. It’s now a nice cool black colour for the wood, rather than the previous bright pink.

On my beach, a few more Banana trees have fully grown! Check them out.

Next, it was time for a trip back to the Blue Sky village! I had a pretty fun time with Yamanon and Ruu.

I checked out the rooms in Yamanon’s house. It’s a pretty nice house, but I especially enjoy the snow globe in the picture above.

We then headed over to the Island to play some fun mini games. I gotta say, we did a pretty good job at the Item Matching Tour!

Yamanon was kind enough to give me the Setsubun beans item. As you can probably tell, I had a LOT of fun throwing them around. 😀 Thank you very much!

To close the day off, I had some good ol’ fashioned Hazel abuse with my newly acquired beans to throw. Lee assisted in the efforts.

WHY HASN’T SHE MOVED OUT YET