Animal Crossing: Happy Home Designer has gone live as a pre-load tonight on the Nintendo eShop in Japan revealing the file size, three new screenshots, and a HOME Menu theme.

The pre-load download reveals the game is approximately 4,038 blocks large, or about 500 megabytes if you’re not using fairy dust Nintendo units. For comparison sake, Animal Crossing: New Leaf weighs somewhere in between 6,000 and 8,192 depending on which region the copy is from.

Alongside the pre-load, three new screenshots of Animal Crossing: Happy Home Designer are featured on the Nintendo eShop listing page for the game. Check them out below, courtesy of NintenDann on Twitter: 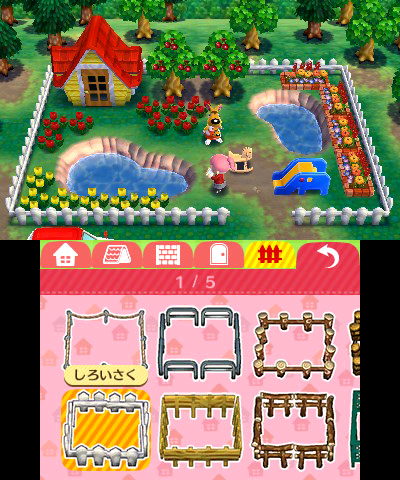 Finally, we have a new HOME Menu theme for the Nintendo 3DS inspired by Animal Crossing: Happy Home Designer. Those who purchase the digital version of the game, at least in Japan, will receive a free download for the associated theme until August 31st. It’s been that or a free card at retail I suppose!

That just about covers all of the small tidbits of news released today. Be sure to check out the two new Japanese commercials released today, as well as our new fancy release date countdown page!

looks sooooooooooo awesome but the thing is, will the cards come in blind packs or not? i’d prefer not or else it will be so frustrating to have two or more of the same card, what will happen then? :/

Of course Tom Nook plays golf. Of course he does.

I wish the game will feature on-line online play functionality so other user can visit your designed houses and what about the number of players? Like will my siblings be able to each create a save slot in this game?

So can you download the theme free on the day I comes out? I can’t find it anywhere and didn’t get a code