Do you know that great feeling? The feeling when you play a game for the first time and it’s just… fun. The controls feel perfectly fluid, the environments are gorgeous, the music encapsulates the feeling of fun, and every new level is a joyful surprise to play. That’s what Yoshi’s Woolly World feels like.

Before we dive into the gameplay though, it’s impossible not to address the (yarn) elephant in the room — those graphics. Level backgrounds feel like they’re from a real-life diorama, every platform is made out of some form of cloth or similar material, and classic enemies have all been “yarnified” as if every Mario and Yoshi game were made like this. For lovers of a playful and colorful art style like myself, this is one of the best out there.

What’s great about Woolly World‘s adorable graphics is that it’s not just for eye candy. Okay sure, it’s definitely great to look at, but many level and gameplay designs are clearly inspired by the graphics style. The trick to finding that last collectible you need, which there are no shortage of, often revolves around the yarn aesthetic. Whether that be a loose string poking out somewhere to pull, or sneaking behind a clever curtain of wool.

Keeping the game fresh is a seemingly never ending can of new gameplay ideas by Nintendo’s fantastic designers. Like other stellar Nintendo games of the past decade, say the 3D Mario series, a new idea is introduced in almost every level. Each one of these ideas or mechanics sticks around for just the perfect length of time, never long enough to feel repetitive or tiring.

Throughout Yoshi’s yarn adventure he rides on a flying magic carpet, hangs onto a gliding swinging curtain, and traverses a bubble fortress. Of course, classic Mario levels such as ghost houses and castles are here too, but they come with their own unique woolly Yoshi twists. It’s always a wonder to start a brand new course and discover what clever new addition the designers have created this time.

Further mixing up the gameplay are special transformation levels inside the main stages. Yoshi transforms into a variety of different forms and creatures with new abilities, like the obvious Mega Yoshi, the destructive Mole Yoshi, the flying Umbrella Yoshi, or the majestic Mermaid Yoshi. Just like anything else in Yoshi’s Woolly World, we don’t see these transformations more than a couple times each — just enough to feel fun but not repetitive. 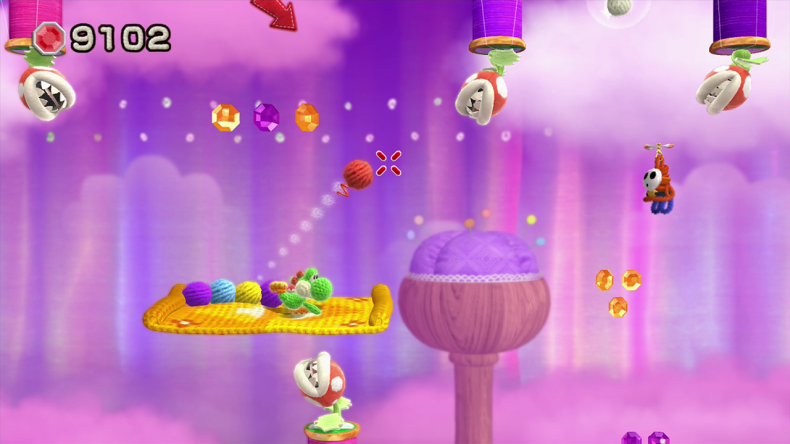 It can be frustrating sometimes when you really love a particular idea and it’s gone so fast, but Nintendo’s designers generally know what they’re doing here. I rarely ever felt the impression that the game’s creators reached a point of “running out” of new ideas and had to resort to repeating themselves.

The one unfortunate area where this was felt is in the fairly repetitive and uninspiring boss fights at the middle and end points of each world. Fortunately, these only take up a few minutes twice per world, so it’s nothing even close to ruining the experience as a whole. These boss fights are still fun too, they just can’t match up to the rest of Woolly World‘s creativity.

I did come across a few maze-type levels as well which stuck out from the rest of the game’s content. These levels are less linear than a typical level and need more exploring to figure out where to go. This might sound good, but it can mean a lot of backtracking or repetition to advance. While I can see the developer’s intent here to create more unique levels to mix things up, it didn’t work for me and left me feeling more frustrated than happy at times. In a game that manages to do such a great job of providing simply just fun levels, the experience maze levels give feels out of place. 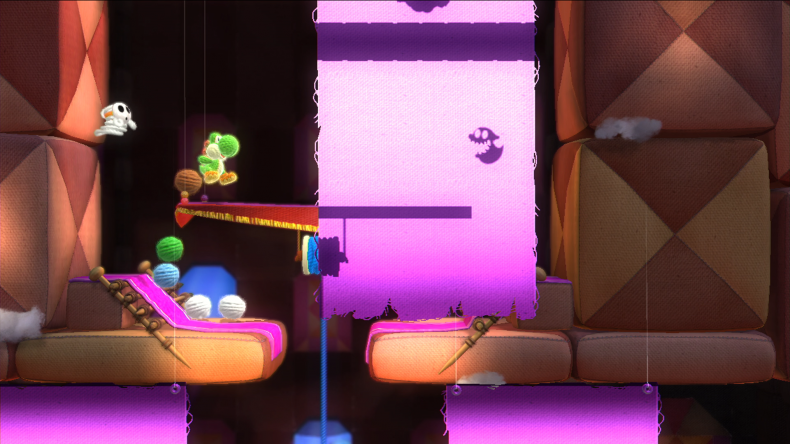 On the whole looking past these minor flaws though, it’s hard not to just shower the game with endless praise. Nearly every level just feels like an amazing treat to experience in both gameplay as well as visuals. Sometimes I just want a game to sit down with, relax, feel great, and have a good time — and Yoshi’s Woolly World fills that need perfectly.

Don’t be fooled by its cutesy art style either — Yoshi’s Woolly World can prove to be a worthy opponent in the later worlds especially for those grabbing all of the collectibles. There are no lives to be found here, and a badge system almost encourages cheating, but a real challenge is still here if you choose to ignore it.

There’s great replay value with an abundance of collectibles to find in every level, which offer worthwhile rewards. Each stage is hiding five pieces of wool, five sunflowers, and 20 Miiverse tokens inside beads. Finding all five woolly pieces in a level unlocks a new Yoshi costume, while finding all sunflowers in an entire world unlocks a new (often difficult) stage. An experienced player can complete the worlds ignoring collectibles at a pretty fast pace, but a completionist has their work cut out for them here!

We can’t talk about Yoshi’s Woolly World without covering its beloved soundtrack either. The tunes just perfectly capture the essence of childhood fun complementing the gameplay and graphics so well, which is what Nintendo games like this one are all about. Click here for a sample of one of my favourite tracks on YouTube.

I don’t believe there is such a thing as a truly perfect game, but Yoshi’s Woolly World comes damn close to a shining experience in my book. With only a few blemishes from time to time, this is a great experience from beginning to end. It’s been a long time since I loved a 2D platformer as much as this one.

Yoshi’s Woolly World is a clear gem in the Wii U’s line-up and every owner of the system owes it to themselves to pick it up if they’re any sort of platforming fan and lover of cute things.

Yoshi’s Woolly World is available exclusively on the Nintendo Wii U and retails for an MSRP of $49.99 USD / $69.99 CAD. Buy it on Amazon US, Amazon Canada, and Amazon UK here.