Players of last year’s Happy Home Designer will know that the title didn’t only just introduce a new way of playing Animal Crossing; it also added a significant amount of new content to the series in terms of furniture and other items.

Some sharp eyed users on both The Bell Tree Forums and Reddit have spotted that one of the new screenshots released for this fall’s New Leaf amiibo update happens to include a piece of furniture previously released in Happy Home Designer.

In the screenshot below showing the player speaking to Wisp, a piece of furniture called the “natural low table” which is unlocked from Goldie near the very beginning of Happy Home Designer can be seen in front of the player and next to Wisp. As far as I am aware, this item is not available in any other previous Animal Crossing titles. 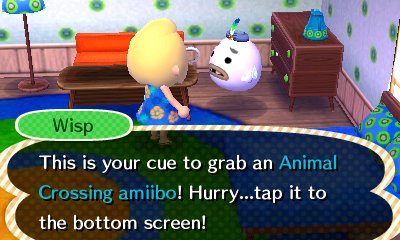 This discovery raises the obvious question of whether it is possible that New Leaf’s upcoming update may actually back-port new furniture from Happy Home Designer back into the original game. It would be a surefire way to ignite some new life back into the aging game on top of the already announced amiibo features.

Going even further, would we see the introduction of the new ceiling furniture type introduced in Happy Home Designer? Or the feature allowing customization of a room’s windows and doors? There’s certainly plenty of speculate on right now.

Nintendo has said there is more to announce on the update in the future, so we’ll keep you up to date on any new announcements in the coming months. Keep your eyes locked to Animal Crossing World!