Starting off, let’s look at these three gorgeous photos of various ‘scenes’ from the game like vaulting yourself over a river or crafting with Tom Nook at Resident Services. Remember that these are artwork and not screenshots, so they might not perfectly match the actual game but still offer a few new things…

Clearly representing the inside of Tom Nook’s Resident Services tent while working away at the crafting table, we can see what looks to be a new hair style on the player! She also has a new toolbox-like backpack item. Finally she’s holding what could be two new tools, but those are probably just part of the artwork and not actually in-game items.

In this scene, we can see the player hanging out on a stump next to his new tent with Fuchsia passing by to say hello! He’s definitely wearing a new jacket item and potentially a new backpack. One other thing to note is that we’ve seen villagers actually holding materials in-game like Fuchsia is, that isn’t just an artistic liberty. 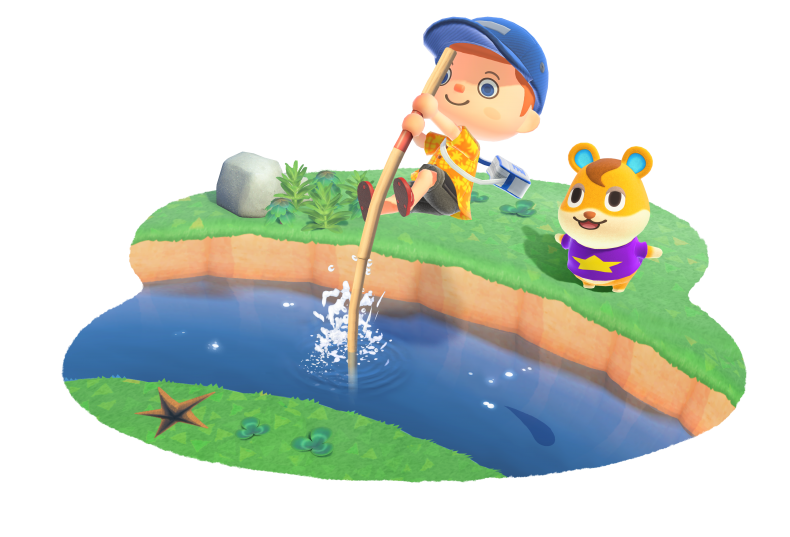 There’s not much to say here, but we can definitely see another new bag item hanging on the player! Hamlet appears to be looking up at the player as he vaults over the river, but there’s a good chance that’s only part of the artwork.

Moving on from the scene photos, we have some fun ‘action’ shots with artwork showing the player with a tool or item of some kind in hand!

In this particular piece of art, we can see a new type of net that hasn’t been seen before. Judging by the colors, this could potentially be the Silver Net or perhaps a version of the net that can be crafted using a metal material. This one carries a more circular shape for the actual net part too, unlike the triangle ‘flimsy net’ we’ve seen before.

Moving on from the net, she’s also wearing a new green back item and sporting what is likely a new hairstyle featuring a long cut on one side of her head and a short cut on the other side! And this purple hat with NTDO is an abbreviation for Nintendo, of course.

This guy is having a blast fishing and he’s got what looks to be both a new hat and a new hair color! Plus, that fishing rod he’s using looks like a higher quality version than the ‘flimsy fishing rod’ previously seen. He’s also sporting a rare round nose shape — did you notice all the nose types we’ve seen so far?

This boy clearly loves to chop down some trees in his spare time, but hopefully not on your island! He’s sporting yet another brand new backpack item fitting his favorite hobby, as well as a nifty shirt that actually translates to ‘Forest’ — part of the Japanese name for Animal Crossing.

NEW FLOWERS!! Yes, this lovely lady has a lot of new things going on — most notably she’s watering a brand new type of flowers for the Animal Crossing series! I’m not fully certain what to call these since I’m a weirdo who writes about Animal Crossing instead of going outside, but I’d say Hyacinths if I had to guess.

And not only are those new flowers, she’s also watering them with a brand new watering can item we haven’t seen before. At first glance, it might seem like the gold watering can, but the blue doesn’t fit and the ‘gold’ really is more of a yellow.

If anything it looks more like a toy, so I’m not really sure what version this could be. Either way, it’s definitely new and an upgrade over the flimsy version you can craft at the beginning.

Our first close-up look at the new designs for fruit in New Horizons is right here! The player here seems to have yet another new hairstyle too with a long dangling ponytail at the back of her head, or at least I think it’s new. Not too much else going on here though, besides the really nice dress with necklace, but we’ve seen it before.

Man, this character knows her colors! She’s really leaning into the tropical island theme of New Horizons with that gorgeous blue hair and matching clothes. Her green back item looks to be new, and her long flowing hair is likely a new hairstyle too.

Alright, you definitely don’t need me to tell you that’s another brand new hairstyle there! Just how many does this game have anyway? Besides the hair, that big wide open mouth is definitely new too! It’s also great to see some more diverse skin tones in a mainline Animal Crossing game at last.

Surprisingly, this is the only artwork release today with a NookPhone in it! Not to disappoint us though, this is definitely a brand new design. If you didn’t already know, we previously spotted that the NookPhone can be customized with different phone cases and this character is holding one of those!

I’ve grouped these last two characters together as I don’t really see anything particularly notable to mention, but they both look absolutely amazing regardless. Especially that flowing red and white skirt on the girl!

There’s nothing to say about them, but enjoy this set of Tom Nook, Timmy & Tommy, and K.K. Slider artwork above!

Finally, here’s a compilation of New Horizons trees and fruit for some odds and ends…

Whew — that’s all of the brand new renders released for Animal Crossing: New Horizons today! Before we wrap up this lengthy article though, I do want to discuss briefly a few general observations across all of the artwork as a whole with a dose of speculation.

First of all, I’m still wondering about some of the back items and whether they will serve any functional purpose or not. Ever since we saw the fish cooler item months ago, it’s been a point of speculation and seeing the new pack of wood on the tree chopper character and the light green bag on the bug catcher makes me wonder even more. They probably don’t actually do anything, but I’m still curious!

Another matter that’s been discussed a lot lately is the emergence of new nose styles, first seen in the Mexico screenshots released earlier this month, and this new artwork only adds to the conversation. Scanning through today’s art, we can spot three different nose styles — a big change from the previous… one style for the series!

Finally, it’s hard not to notice the dramatic increase of hair styles and colors we’re seeing in Animal Crossing: New Horizons compared to previous games in the series. Combined with the new nose styles, it’s clear that there will be a major focus on character design customization in this game.

With all of these new options and seeing a couple new colors in today’s artwork, could there possibly be a full color slider for choosing your hair instead of a set of specific color choices? It probably won’t happen, but it’s definitely interesting to think about given all of the new additions we’re seeing.

Going a step further, I’m really looking forward to seeing how the character creation or customization process will work in New Horizons generally. With all of the new possibilities, the classic ‘ask you vague questions that correspond to secret pre-set styles’ may finally have to depart for something more specific.

Anyhow, that wraps up our look at the gorgeous and insightful new artwork released by Nintendo today for Animal Crossing: New Horizons! Please leave a comment below if you spot anything else you’d like to share, or you’d just like to rave about how great the artwork is. As always, stay tuned to Animal Crossing World for everything there is to know about New Horizons!

good job noticing it could be hyacinths…………..

really good article : ) i’m excited for all the changes

There is no verified source of these images. Don’t spread misinformation.

Can’t wait! We must be getting some more news in January in the form of a Nintendo Direct with concrete info!

Great article, though! All awesome observations! I always think I have a great eye for spotting new stuff, then I read your articles and see a bunch of stuff I missed! Thanks for being on top of it, Justin! Been reading your blog since ACNL was still dubbed AC3DS without an actual title!

Thanks for reading! Long live ac3dsblog.com

Well I am fairly outdoorsy and happened to plant 200 hyacinths just this fall, and I can tell you, those are definitely hyacinths. Glad to see them! The poppies/anemones we saw revealed before, too…I really like both varieties of flower and look forward to landscaping with all of them and seeing what hybrids are possible. 🙂

Why does it look so much like My Sims lol
Also what really bothers me will switch lite be supported?

I don’t think there’s any reason to worry that it won’t. There are very few games that don’t work with Switch Lite, and those that don’t are all because they require detachable joy cons (which you can work around even then, though it’s usually too awkward to be worthwhile). The only games that really don’t work with it are ones that require unusual peripherals. So basically just Labo, because the Lite is too small to fit into the cardboard shapes properly. Anyway, I can’t see any possible reason why AC: NH wouldn’t run on the Lite. It doesn’t require detachable… Read more »

The fruit looks hyper realistic now and clashes with the game’s style. It just looks odd. I’m sure no one will care and just praise the overuse of bloom and all the other shaders. The rendered art isn’t a true representation of the models or textures ingame but still manages to look so off like it’s some weird hyper realistic mysims crossover.