We have another round of new officially licensed Animal Crossing accessories for the Nintendo Switch that have been announced for release in Japan!

Let’s go over all of these new Animal Crossing accessories for the Nintendo Switch and where you can get them!

The Animal Crossing Cover & Skin sets for the regular Nintendo Switch provide two parts: a single cover that goes over both the back of the system and the front screen, plus two skins for the Joy-Cons.

There are two different designs for the cover available, one featuring a collage of Animal Crossing characters and icons in a grid and the other with a grass landscape of trees, fruits, flowers, and some characters. For the Joy-Con skins, both are a pattern of icons with one in blue and the other in green.

The Animal Crossing Cover & Skins for Nintendo Switch and Joy-Cons cost approximately $36 USD and you can find them on Amazon Japan here.

Now for those of you rocking a Nintendo Switch Lite, another version of the cover & skin is available where the skin covers the entire system including back except for the display, since the Lite doesn’t have separated Joy-Cons. Like the original cover though, the display has a cover over top that can be flipped up for when you want to play.

The same two designs are available as the regular Nintendo Switch covers, one with a grid of characters and artwork, and the other featuring a grass forest landscape with characters.

The Animal Crossing Cover & Skins for Nintendo Switch Lite cost approximately $27 USD and you can find them on Amazon Japan here.

If you don’t want a full-on cover and skin for your Nintendo Switch, there’s also the Quick Pouches available for just sliding in your regular system for storage or carrying on the go.

Once again, the same two general designs are available as options for the Quick Pouch. Pick between the grid pattern of characters and artwork or the grass forest landscape!

The Animal Crossing Quick Pouches for Nintendo Switch Lite cost approximately $18 USD and you can find them on Amazon Japan here.

Finally, we have a pretty unusual item you may have not seen before. These are little small cartridge pods for storing in up to two Nintendo Switch game cartridges! You might be familiar with game cart cases that fit a dozen or so games, but I’ve never seen small pods intended for just two games like this before.

Either way, they’re pretty damn cute and can store both Nintendo Switch or Nintendo 3DS games. Someone on Twitter remarked that they look like AirPods cases and I definitely see that! 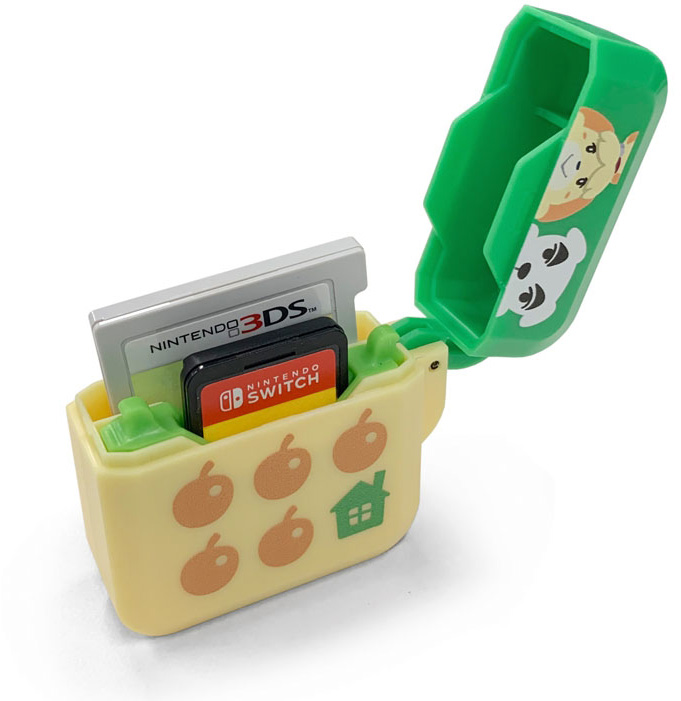 There are three Cartridge Pod designs to choose from: Isabelle and K.K. Slider, Able and Sable, or Timmy and Tommy. Each feature their own unique set of icons and color scheme to go alongside the characters.

The Animal Crossing Cartridge Pods for Nintendo Switch Lite cost approximately $20 USD and you can find them on Amazon Japan here.

Unfortunately, we think these accessories from Keys Factory are incredibly unlikely to be released overseas in North America and Europe, unlike the other Hori accessories recently announced. It’s not all bad news though as you can order these from Japan and have them shipped internationally from Amazon Japan if you’re willing to pay.

There’s also a couple more items than the ones we highlighted in this article that you can check out at Amazon Japan, we just covered the most interesting and appealing options here.

Anyway, that just about wraps up our summary of all these new Animal Crossing accessories for Nintendo Switch by Keys Factory! Most of all, I’m in love with the covers that flip down over top of the screen, how cool is that! If you’re interested in any of these, let us know in the comments below what you think and which accessories.