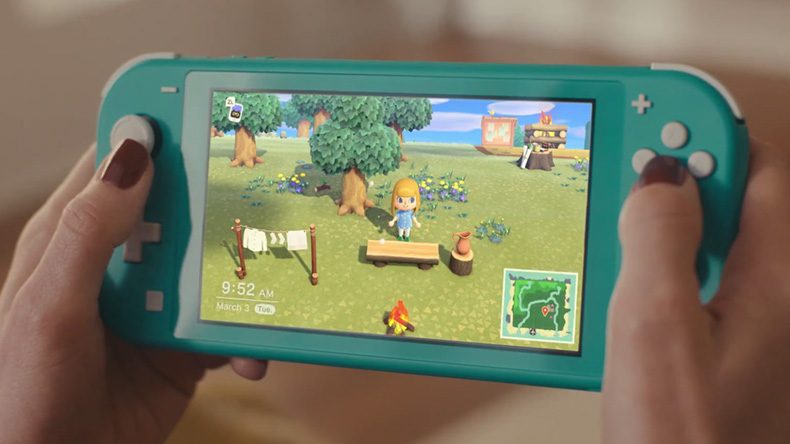 Nintendo’s marketing for Animal Crossing: New Horizons is beginning to ramp up today with the surprise release of a brand new commercial for the game!

The new commercial features the game being played on a Nintendo Switch Lite by both a mother and her daughter, eventually playing together with wireless multiplayer on the same island.

Give the first Animal Crossing: New Horizons Commercial for North America a watch yourself below:

We’ll have a longer follow-up article later on this commercial and all the exciting discoveries inside it!

HMM! Y’know…when I watched the commercial, it was the fenced pear trees that caught my eye, but now that you have this screenshot…THAT’S A DIFFERENT ISLAND MAP!

Okay, with this and the brick paths, I’m super happy about New Horizons, today.

There is also an absolute lack of neighbor houses on the map. Only your house, the square area, etc. Also, a ship dock area on the bottom right. And before someone says it is an early build, the title screen says version 1.0.0 on the top right.

I doubt there will be villagers waiting for you on a deserted island. Maybe they fly or sail in. I’m just sad we get such a bland and boring ad.

I think we were told we’d get just two neighbours to start with, though you’re right…I don’t see anything there other than the main square except one small brown spot that I assume is the player’s tent/house . But then, we don’t know what they used for footage for this commercial. The title screen says 1.0.0, but maybe the bit where the map is shown was taken out of development footage. I mean, those two women probably aren’t even playing AC…they’re just actors and there probably isn’t anything on those screens at all, and any gameplay is added in after.… Read more »

brings a tear to my eye, I hope I can play with my kids one day!

Why did I get a downvote for asking why they can’t play with their kids? I know they can’t literally play NOW, as it isn’t out until March 20th, but ‘one day’ sounds so far off… I was wondering if their kids are too small or not interested in AC (or etc). Is that not okay, for some reason? Was it rude to ask?

Nope. The date when the Switch was released.

Vote Up2Vote Down  Reply
Vladimir (not the AC character)

GUYS I SAW PEARS ON THE TREES!