Four new upcoming events for Animal Crossing: New Horizons have been revealed as part of the just-announced huge April Update to the game! Let’s go over everything we know so far about these exciting events coming soon.

While some information was shown for these events in the April Update trailer, we’ve compiled some additional details and screenshots from the official Nintendo of America press release and the Japanese Nintendo website!

Here’s absolutely everything revealed so far for the April, May, and June events in Animal Crossing: New Horizons…

As the first new event to take place as part of the April Update, the Nature Day event begins in Animal Crossing: New Horizons on April 23rd — the same day as the update releases. The event will run for a little under two weeks until May 4th.

If you’re still having nightmares from the Bunny Day event though, don’t worry as this event doesn’t appear to involve any new balloons or other invasive additions like that!

Rather than that, the Nature Day event will feature a special set of Nook Miles+ challenges available for a limited time during the event period. From what we’ve seen so far, these challenges will include goals for planting trees and watering flowers. 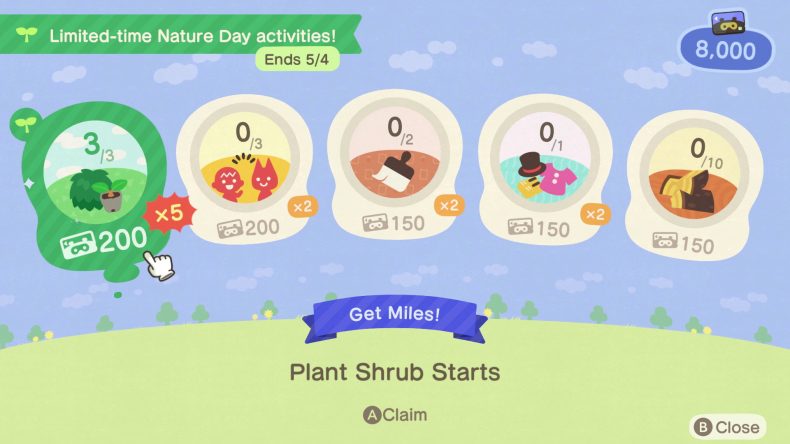 In addition to existing trees and flowers though, the Nature Day event will also encourage players to take advantage of the brand new bushes introduced by Leif with his Garden Shop in the April Update. One of the Nature Day challenges will reward planting those fancy new bushes!

We don’t know about anymore Nature Day features other than these Nook Miles+ challenges, but it wouldn’t be surprising to see a couple event items be included too.

Thankfully, the Leif special character himself appears to be detached from the Nature Day event, so his Garden Shop stall at Resident Services will still show up from time to time after the event ends! It’s possible that he will be available more frequently during the event though to make it easier to collect bushes.

Before the Nature Day event in Animal Crossing: New Horizons even concludes, another activity will begin with the May Day Tour event arriving on May 1st! This one will be a shorter affair than most others with the event running for a week until May 7th.

According to the Japanese Nintendo website, these May Day Tickets will be given on a regular basis to everyone who works on the island as a gift of gratitude for their hard work! Hopefully we’ll still be able to buy additional ones with Nook Miles or another currency too though.

As for exactly what these new May Day Tour islands that we can travel to will offer, they appear to potentially be somewhat puzzle based from what has been shown so far. The island looks to be covered in a maze of sorts using bush fences as barriers with prizes seen behind different areas!

Even if it’s hard to predict exactly how these new islands will function, they certainly look very interesting and completely different than the currently available Nook Miles Ticket islands. We’re always excited to see brand new content that adds fresh gameplay to the game and these look to deliver on that.

And perhaps most exciting, it seems that these special May Day Tour islands will feature a beloved returning character from past Animal Crossing games — Rover! Spotted in the very back corner of the preview we got, it’s clear that Rover has arrived in Animal Crossing: New Horizons at last.

We can only speculate at this point as to what purpose exactly Rover may serve in New Horizons, but it looks like he might be in charge of the May Day Tour islands. Perhaps Rover will help explain how the tours work or provide us some goodies when we speak to him!

International Museum Day Event – May 18th to May 31st

The International Museum Day event arrives on your Animal Crossing: New Horizons island starting May 18th and running through until May 31st! In honor of the event and museums around the world, a fun Stamp Rally will be held during this period.

Every player will begin the International Museum Day event by collecting a special stamp card from Blathers. While the event is taking place, special Stamp Rally Booths will be setup around your island’s Museum in most exhibit sections to help fill out your stamp card.

By visiting and enjoying the fish, bug, and fossil exhibits in the Museum, your stamp card will be completed and a special event reward will be given to you! Unfortunately, we have no idea what this reward will be at this time.

Finally, the Wedding Season event will bring some love in the air to Animal Crossing: New Horizons beginning on June 1st and lasting the entire month of June!

The Reese and Cyrus special characters who ran the recycling Re-Tail shop in Animal Crossing: New Leaf are making a grand return to celebrate their wedding anniversary in June. During the event, you’ll be able to meet Reese and Cyrus by visiting Harvey’s Island where you can find them planning the anniversary.

At Harvey’s Island, players will be tasked with arranging the married couple’s anniversary photos in Harvey’s picture studio! Using some brand new wedding-themed furniture items, you can arrange the room and take photos, and take home the new items as your reward for helping out.

Hopefully Reese and Cyrus will receive a more permanent role in Animal Crossing: New Horizons than this relatively basic event, but there’s no indication of that yet. Although it’s a little suspect that such a simple event will take place over an entire month long period, so there’s reason to believe Nintendo may not be telling us the full story yet…

Whew — that just about covers absolutely everything we know so far about these four upcoming events for Animal Crossing: New Horizons taking place between April and June 2020! If you spotted any other details you think should be included, let us know in the comments.

I’d love to hear what event you’re most looking forward to experiencing in the comments below as well. Personally, I think the May Day Tour event looks to be the most interesting as bringing an entire new set of mystery islands into the game is great addition!

For more on Animal Crossing: New Horizons, check out our many helpful pages on the game in the Guides section here.