I am away for a week in Japan, so unfortunately news will not be posted during this time. Sorry! - Justin

I am away for a week in Japan, so unfortunately news will not be posted during this time. Sorry! - Justin

In the screenshot we can see that the Fishing Tournament has some sort of a tent now with an official closing ceremony! You can see first, second and third pedestals for the winners of the tournament.

Hmm considered! How did you spend your weekend? In our village, fishing tournament was held on Saturday! I’m fishing tournament will take place during the month every month 10-12 months and 1-5! Can I get a prize and so caught a big fish, ne ~ everyone please join us!

Visit The Houses of People You Streetpassed:
At the Happy Home Exhibition Street in front of the shopping street, you can visit the model houses of people you street passed. Any piece of furniture you like you can also order through mail order sales!

Take a Relaxing Vacation on the Island of Endless Summer!
Former Mayor Tortimer, after retiring, is now living on this resort island of endless summer. You can take many kinds of tours and purchase gifts to bring home amongst other things. Enjoy a relaxing vacation either by yourself or with everyone you know!

Visit Lots of Towns in Your Dreams!
When you sleep in the Dream House, you visit an actual person’s real town. You can freely walk around their town and visit houses while dreaming!

Make a Best Friend!
Become best friends with your Nintendo 3DS friends! If both you and your friend save one another as best friends, you will be informed of when that person comes online and even if you aren’t currently visiting their town, you can still talk to them by sending messages!

KK’s Famous Tunes Are Now Club Music?!
Every Saturday night you can enjoy listening to KK Slider’s music at “Club 444.” (Note: Club 444 in Japanese is referred to as “Club Shi Shou” or “Club See Show” – it’s a cute pun.) From Sunday to Friday, during D.J. KK Time, you can enjoy KK’s normal sound with a club music twist!

Say Hi to Far Away Friends!
When using your megaphone, you can call one of your animal friends by saying their name inot the 3DS mic. Even if they are far away they can still hear you and respond!

Swim, Dive, and Fully Enjoy the Sea!
If you are wearing a Swim Suit (they called it a Marine Suit in Japanese), you can swim in the ocean and dive beneath the water. Pay close attention to the depths and you can collect items that you can’t via fishing like special shells, sea grapes, and others!

February 2013
3rd: Setsubun (its a Japanese holiday where someone dresses up as an “oni” (demon) and you throw beans at him. Most likely will be changed in localization.)
9th: Fishing Tournament
11th: Carnival

July 2013
7th: Tanabata (Star Festival, another Japanese holiday about star crossed lovers– look it up, it is a good story

Thanks to Saratoga from TBT and Daniel from GoNintendo for these translations.

Check out the updated pages:

And the new pages:

This time we seem to have a screenshot of a basic barebones house on the left and an upgraded customized house on the right. The upgraded house appears to be heavily customized with house pieces from Tom Nook. This is almost certainly taken inside the Model Homes area which makes use of StreetPass.

In the hope that you have seen in Kent, who delivered the photos in the exhibition hall housing! “Happy Home Exhibition” ♪ I’m able to, thank you also model house is not just visit the hall, the furniture that you like to order direct!

The end of this translation implies that you can order the furniture you view in the Model Homes.

This time we’re getting a picture of Kent who is Lyle’s assistant. Apparently he takes you up to the Model Homes area. I might have it slightly wrong though so let me know if you happen to have any more information.

Today is a weekend, do you have anything planned? I have dinner with Kent’s twin brother working in the exhibition hall housing. Model houses are gathered by passing in communication you can visit so I look forward to passing with someone too.

Extra special thanks to Prof Gallows for the proper translation.

We’ve got new scans in showing Gracie, Jingle and more. Take a look below. Click on the thumbnails to see larger versions. 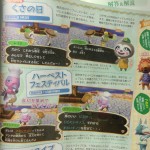 First look at the Town Map and Bottom Screen

Famitsu has two new screenshots up on their website that give us our first look at the bottom screen! Up until now, every screenshot released had been only of the top screen. With these new screenshots we’re able to see the Map for the Town and the Island.

It looks like you’ll be able to access the chat menu at any time no matter which screen you’re on by pressing the green bubble at the bottom. Certainly will be handy when playing online. I also noticed that your Town Tree is an icon on the map, kind of like the Wishing Well from the Gamecube game.

Also, what is that big orange button on the right? Just a thought but maybe this is only half of the map and pressing that goes to the other half of the map.