After Friday’s leak from Gamefly with a new version of the Animal Crossing: amiibo Festival box art, Amazon has given us even more with a look at the bundle box art as well as new details on the contents.

The newly revealed box art for the bundle shows both the Isabelle and Digby amiibo figures on display front and center, confirming that the previously announced Isabelle + Digby bundle from E3 is still on track for release this holiday. There’s no confirmed price for the bundle yet.

And while we already knew that the bundle would include three Animal Crossing amiibo Cards, we assumed they were random like the card packs. According to this new box art, the three included cards will actually be Goldie, Rosie, and Stitches with every package.

It’s worth noting that we have yet to see any of these three cards revealed yet for Series 1 or 2, so it’s possible they’ll either be part of Series 3/4, or even exclusive to the Animal Crossing: amiibo Festival bundle. I wouldn’t put it past Nintendo to do the latter, they do it fairly regularly with other amiibo!

Speaking of exclusives, there’s a noticeable “Limited Time” blurb on the bundle for Digby. We’re not sure exactly what this means, but it could indicate exclusivity of the Digby amiibo to the bundle for a limited time. Or alternatively, it could mean that the bundle will only come with Isabelle after a period of time. 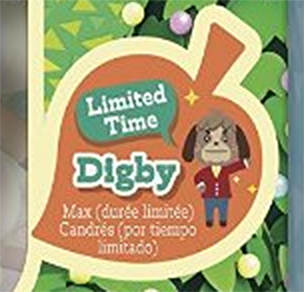 Finally, we spotted this new piece of character art on Amazon’s listing featuring all eight of the playable amiibo characters in the game:

Given the appearance of the new box art on both Amazon and GameFly suddenly, it would seem that announcement for the game with new details is coming very soon. You can be sure we’ll cover it all, so stay locked right here!