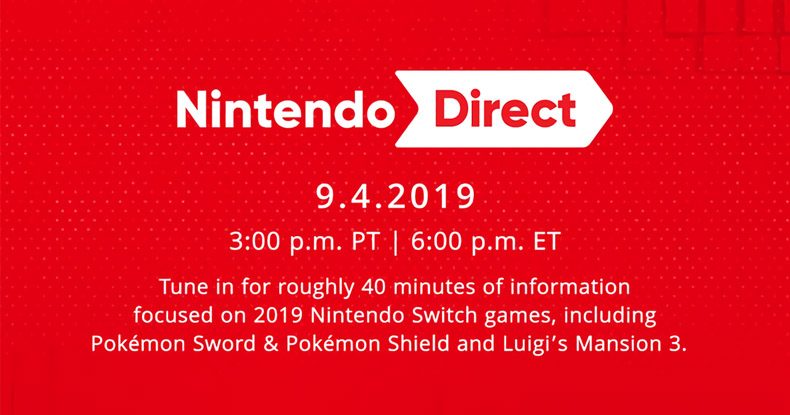 The autumn Nintendo Direct that we’ve been waiting for and expecting has been officially announced today by Nintendo!

Coming as the first Nintendo Direct since the big E3 2019 Nintendo Direct back in June, expectations are sure to be high for this event. Nintendo is officially billing this presentation as being ‘focused on 2019 Nintendo Switch games including Pokemon Sword & Shield and Luigi’s Mansion 3.’ though, so it might be wise to keep your hype levels in check.

For that reason, we wouldn’t suggest going into this Nintendo Direct expecting to hear more about Animal Crossing: New Horizons but rather hoping for the best and being pleasantly surprised if there’s a showing. Despite Nintendo’s words about focusing on 2019 games, focus doesn’t mean exclusively and there tends to be a couple surprises in a Direct anyway.

While it was only a few months ago that we last saw the game, including the lengthy Treehouse Live gameplay demo, it’s certainly possible for Nintendo to put together a short trailer highlighting a new feature or two we haven’t seen before to tease us until a more in-depth reveal later.

The initial reveal of Animal Crossing: New Horizons at E3 2019 notably avoided showing any form of content beyond the very early game experience and a few quick shots of slightly developed towns with outdoor decorations. We still haven’t seen the shops and many characters we expect to find in any mainline Animal Crossing, and Nintendo will need to start showing them off sooner or later.

Given that we are approaching the six month mark until the release on March 20th next year, the time to show off those features might be soon. That could be in this fall Nintendo Direct, or it could be in an Animal Crossing Direct later in the year. We’d expect to hear more at least before the beginning of the year as January will be quite close to the release.

All that being said, we can’t say for sure if Animal Crossing: New Horizons will be included in the Nintendo Direct so you’ll have to tune in yourself when it begins at 3PM PDT / 6PM EDT on Wednesday, September 4th.

You can watch it live at Nintendo’s website here, and of course we’ll cover all of the Animal Crossing related highlights right here after the presentation.