It looks like the grass textures have changed in New Horizons, just as many fans requested

We’re just starting to pore over the new Animal Crossing: New Horizons footage released during today’s Nintendo Direct, and we couldn’t help but notice a pretty obvious change to the game’s graphics compared to E3 2019.

One substantial change in New Horizons compared to the past Animal Crossing games is the use of a more natural looking grass texture on the floor of the world. In past games the floor was essentially one giant intense grass pattern, plus some dirt areas. Whereas in New Horizons, it looks more like natural grass with some spots of the old shapes pattern overlaid with transparency.

A lot of fans are happy with the new look, including myself, but felt that the spots of the shapes pattern were just too uncommon and made the game feel like it was missing part of the Animal Crossing look we know and love. Plain grass everywhere just didn’t look quite right.

It looks like Nintendo has heard the feedback and made some changes though, because there’s a very obvious increase in the density of the shapes pattern in the grass during today’s Nintendo Direct footage versus the E3 2019 videos. The change is far too blatant to be a coincidence. 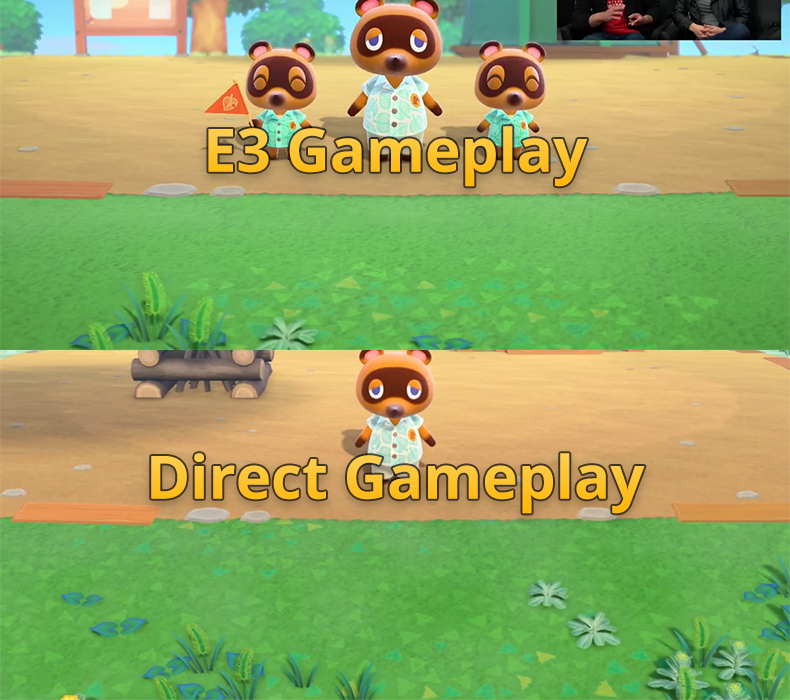 For starters, here’s a side-by-side comparison of the exact same area of grass when either Tom Nook or Timmy and Tommy are speaking to us at the beginning of the videos from today and back in June. This is great for showing the change given how similar the scenes are.

Clearly in the original version of New Horizons, the entire left, right, and top areas were completely missing the shapes pattern with only the bottom area having a few small spots. By comparison in the newest version, the entire grass area seen in this scene features some amount of the pattern to varying levels of intensity.

Next, let’s take a look at some more natural shots of New Horizons zoomed farther out to show that this change isn’t just a coincidence in the first comparison, but rather a more grand adjustment across the entire world. Here’s one of the best we could find for the general spring/summer season look.

This comparison shows that the change in grass textures is significant across the entire world and shows us the difference on a grander scale. A good solid half of the first screenshot from E3 has a plain grass texture with the other half featuring spots of the grass shapes, whereas the new Direct screenshot has nearly the entire world covered in some amount of shapes texture.

There’s significant differences in both color and lighting too, but let’s not focus on those as it’s likely mostly a change in the calendar date, weather, time of day, and simply how the videos or screenshots were processed.

Now let’s take a look at the other seasons in New Horizons too because there are some big changes to be found here. Most notably, the snow season at E3 2019 had absolutely no classic shapes on the grass texture at all and was a completely plain snow landscape unlike past Animal Crossing games.

Thankfully, we can see now in the comparison below that this has been remedied and the snow season looks much more like what you would expect from an Animal Crossing game. Also, you can see snow on regular trees in this screenshot — we’d only seen the cedar trees previously! They look fantastic.

Finally, we’ll take a look at one more grass comparison with the autumn season in New Horizons. Much like the spring and summer seasons, the E3 version of the game had only spots of grass shape textures sprinkled on a mostly plain landscape.

In the latest version of New Horizons shown in the September Nintendo Direct, those empty plain areas during autumn have been filled with a subtle version of the grass shapes too. Check it out in the final comparison below.

Overall, it’s clear that substantial changes have been made since June to New Horizons’ grass and landscape graphics, and in particular making the classic Animal Crossing grass shapes far more prominent and plentiful throughout the world.

It’s great to see that Nintendo’s developers are clearly listening to what fans had to say after the initial reveal at E3 and already making changes even before the game releases. Let’s hope that accommodating cloud save backups for New Horizons might be next up on the list.

What do you think of the changes to grass textures in the latest New Horizons trailer? Let us know in the comments below!

Personally I’m very happy with these changes, as you could probably tell from the fact I wrote an entire article on this one minor subject alone… I think it goes a long way towards making New Horizons feel like an Animal Crossing game after some fans seemed disappointed at E3 with the new look.