The most obvious discovery inside the ad, shown in the banner above, has to be the staircase attached to the cliff in the back! Given that we have never seen any accessibility to the second level before, it’s safe to assume this is a feature to be built at some point in the game.

This leads us to believe that at least the initial first few days on the deserted island could have us restricted from the second level, which would be a first in the series. However, another possibility is that the vaulting pole can somehow be used before the stairs are built. 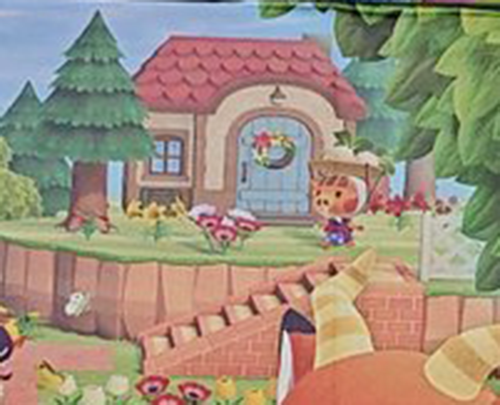 Hopefully the stairs can come in a variety of designs just like bridges in Animal Crossing: New Leaf and ideally a full matching set of designs too. And who will build them anyway? Could Resetti’s new job be in construction?

Beyond the buildable stairs, we can spot a new type of brick path design running between the stairs and the nearby bridge below. It appears to be matching the brick design of the stairs too.

While the new pathing feature has been known for a long time, this is the first time we’ve ever seeing a different design on display and I am SO glad to see it. I was beginning to worry we weren’t going to see any more path designs! There’s plenty of potential here for even more than just dirt and bricks too.

Those are the main two obvious discoveries from this new advertisement, but a few other small things may be worth mentioning. For one, we can see what I believe to be a new type of fencing behind the bench with Julian.

We can also see our second sighting of ‘Joan Junior’ by the house in the top right. We first saw them in the recent sticker accessories, but it’s great to see an in-game look!

If you look closely at the door on that nearby house too, you’ll notice the door has been customized to a light blue design. And of course a lovely flower wreath is on the door, but that’s not really new.

Finally, for those keeping track of newly confirmed villagers, I’m fairly certain this is the first time we’ve seen Julian, Beau, and Pekoe in Animal Crossing: New Horizons! The confirmations keep coming and I’m feeling quite confident every villager from New Leaf will return.

So, what do you think? Did you spot anything else interesting in this fresh Animal Crossing: New Horizons artwork? What other path types would you like to see? Let me know in the comments below!

Thanks to @wario65535 for sharing the advertisement photo, thanks to @Doraemon_203 and @lrregu for the edited banner.