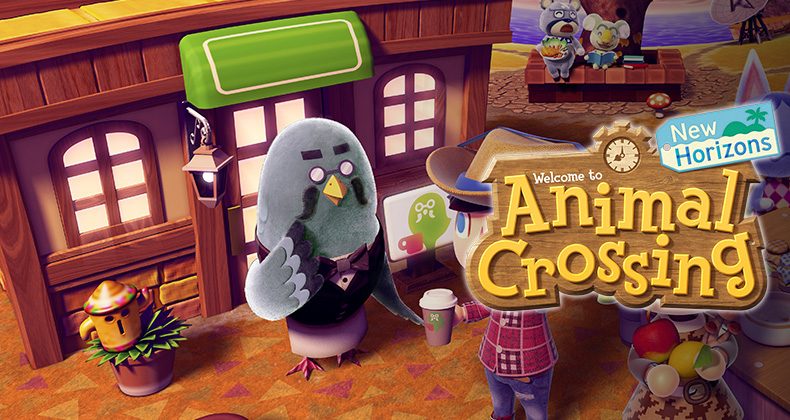 Eagle eyed Twitter users have spotted and uploaded sightings of in-game characters making some very confusing remarks about a variety of content in Animal Crossing: New Horizons that doesn’t appear to even exist yet in the current version of the game.

The most exciting new mentions come from Clay the Lazy villager in an English video and Maddie the Peppy villager in a French screenshot. In both instances, they make a direct reference to Brewster and drinking a cup of coffee served from him.

In the first English video below, Clay mentions how incredibly awake he’s feeling on a caffeinated high, thanks to drinking 17 entire cups of coffee despite Brewster’s apparent advice to not do so.

Going even further, the French screenshot with Maddie below actually mentions The Roost as a specific location in highlighted color text just in case there was any possible doubt!

So ye the Roost and Brewster, where tho ??
'Imagine you go to The Roost and there's noone. Now u only have to get a drink with Brewster' #AnimalCrossing #ACNH pic.twitter.com/CQ61Ok0B1O

Here’s an English translation of the French dialogue seen above generously provided by @_mehdigeek:

Imagine, you are at the Roost and no one is there. All you can do is get a drink with Brewster!

Between both of these different pieces of speech coming from villagers, it seems almost certain that both Brewster and The Roost location will be coming to Animal Crossing: New Horizons in the very near future. 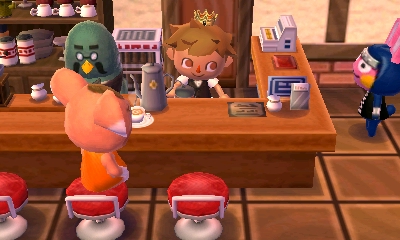 For those who aren’t familiar, the Brewster character owned and operated a cafe called The Root in Animal Crossing: New Leaf which could be constructed after upgrading your Museum to a second floor.

Inside The Roost, you could pick up a cup of coffee from Brewster either for enjoying inside or taking with you on the go and even work for him fulfilling coffee orders for animal visitors! (image source)

If you spot any more unique dialogue regarding Brewster in-game, please submit to us on Twitter @ACWorldBlog!

Another intriguing discovery of possible additional content comes from Isabelle at Resident Services when discussing your current Island Evaluation rating. Every island in Animal Crossing: New Horizons can receive a rating from 1 to 5 Stars and Isabelle typically offers some advice on how you can improve your rating.

Strangely though, in one of her speeches to help you improve the island rating, she notes that people like to judge an island based “on the types and number of shops it has” and “what screams ‘development’ more than a wide range of storefronts”.

In past Animal Crossing games like New Leaf that featured a wide range of stores to build, this might make a lot of sense, but it feels pretty out of place given the current buildings available in New Horizons.

Currently, the only two shop related buildings that can be constructed in the game are Nook’s Cranny and the Able Sister’s storefronts. So we’re not really sure why Isabelle would be suggesting the player to add more shops to the island when it’s actually impossible to do so!

It’s quite possible that this is another sign of upcoming content for Animal Crossing: New Horizons in the future and the island rating system has been designed in advance to accommodate for when additional shops are added to the game.

Art Paintings & Statues in The Museum

In addition to the remarks from Isabelle about additional shops or buildings and the Brewster mention by Maddie, we covered some more interesting dialogue from Fang earlier today!

In case you missed it before, he references enjoying some art in the local island Museum, despite the fact that there is absolutely no art paintings or statues in Animal Crossing: New Horizons right now. It’s likely that the Crazy Redd character could make a return alongside any update adding art to the Museum.

Check out the full clip of Fang discussing viewing art in the Museum from @sylvidia on Twitter below:

So what do you think of all these little tidbits of unreleased content for Animal Crossing: New Horizons showing up in villager dialogue? We’re inclined to say that the instances are piling up a little too high to simply chalk these up to mistakes or coincidences. Let me know your thoughts in the comments below!