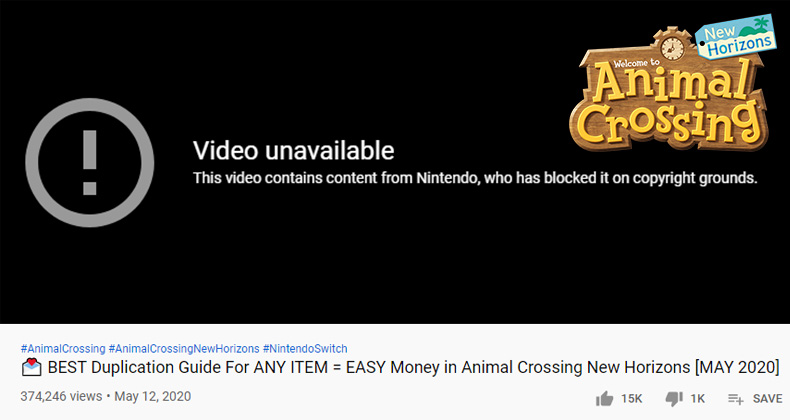 You’ve no doubt heard about the latest duplication glitch found in Animal Crossing: New Horizons recently, and Nintendo isn’t too happy about it!

We’ve avoided covering this duplication glitch so far and others in the past on Animal Crossing World as I personally believe these bugs are harmful to the game’s long term longevity and would prefer to limit their spread. However, the cat’s definitely out of the bag on this one.

It appears that Nintendo isn’t a big fan of instructions for this glitch being broadcast either as we’ve spotted at least one widespread video with over 350,000 views on YouTube covering the duplication exploit receive a copyright claim from the company.

Using the copyright claim system on YouTube, Nintendo has blocked the duplication glitch instructional video from being viewed worldwide leaving behind the error screen seen above. However, there are many other similar videos still available, so the work by Nintendo’s lawyers don’t seem to be particularly comprehensive.

Interestingly, this definitely isn’t the first time Nintendo has made use of copyright claims on YouTube in an attempt to remove information about Animal Crossing: New Horizons.

Back in late March near the game’s release when another duplication glitch first surfaced, we noticed that Nintendo made similar copyright claims to a number of popular videos on YouTube covering that exploit and taking them down, just like this. (here’s a few examples)

Shortly after those videos were blocked though, the company released a brand new update for Animal Crossing: New Horizons removing the glitch from the game. So if history is any indication here, it’s a good sign that Nintendo is well aware of this glitch and are preparing a quick fix to the exploit as we write this right now.

We won’t be sharing any specific instructions on the duplication glitch and how to perform it here, for the reasons stated earlier in addition to preferring to be spared by the Nintendo Ninjas, but you can easily find it elsewhere online if you’re so inclined.

There’s potentially a debate to be had as well about whether using the YouTube copyright claim system to remove information like this is fair or appropriate. In our view though, this is obviously well within Nintendo’s rights and the right move to reduce the impact of game-breaking issues.

What are your thoughts on the latest exploit and duplication glitches in general? Let us know what you think in the comments below, including whether you’ve made use of these bugs yourself or not. For more on Animal Crossing: New Horizons, check out our Guides page here.