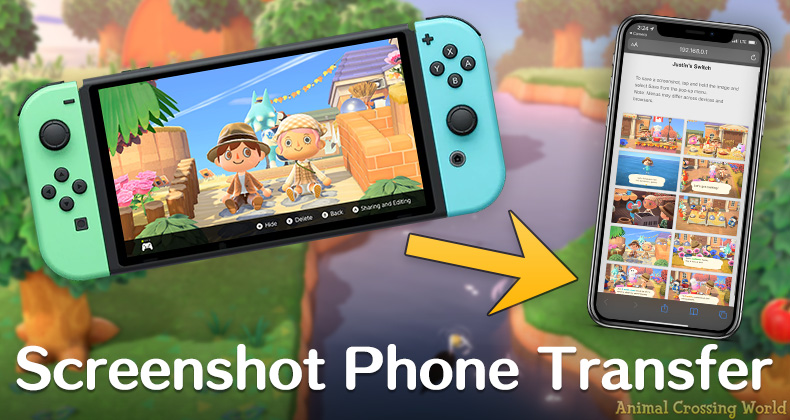 A completely new method for sending your favorite Animal Crossing and other screenshots straight from your Nintendo Switch to a smartphone has been introduced in the latest system software update!

Previously, the only easy way to transfer Animal Crossing: New Horizons screenshots and videos from your Nintendo Switch has been uploading to social media like Twitter or Facebook. For folks who already actively use these platforms, it works great, but not everyone is a fan of this method.

Of course, there’s also always been the option to directly transfer media from your microSD Card, but that’s a clunky step that most prefer to avoid and isn’t ideal at all for smartphones requiring an adapter to use.

Thanks to the latest Nintendo Switch Version 11.0.0 update released today though, there’s a brand new way to transfer Animal Crossing screenshots and videos straight to your smartphone without the use of any social media accounts.

Step 1: Select ‘Send to Smartphone’ On A Screenshot Or Video

To begin transferring some screenshots or videos from your Nintendo Switch over to a smartphone, start off by pressing A on any media in your Album and selecting the new Send to Smartphone option.

You’ll be given a choice between sending just the one piece of media you’ve selected, or using Send a Batch to pick up to 10 different screenshots for transfer all at once. Only a single video can be transferred at a time though.

Step 2: Scan QR Codes With Your Phone’s Camera To Connect

Next, you’ll be presented with the first of two QR Codes on your Nintendo Switch’s screen. These QR Codes can be easily scanned by opening the Camera app on your smartphone and pointing at the QR Code on screen. On iOS, a banner appears at the top prompting an action.

Most modern devices will natively support this right in the basic default Camera app, however if nothing happens, you may need to download a third party QR Code Scanner app from your platform’s App Store to proceed.

Scanning the first QR Code will connect your phone to a local Wi-Fi network created by the Nintendo Switch for the purpose of transferring photos. Once the Switch has detected your phone as connected to the network a few moments later, a second QR Code will appear on screen.

Go ahead and scan the second QR Code displayed on your Nintendo Switch in the same manner you did the first one. This time, scanning the code will prompt your phone to open a webpage at the local address of 192.168.0.1 in your browser.

If everything has gone according to plan, you’ll be presented with a webpage in your smartphone’s browser containing all of the screenshots or video you selected to transfer from your Nintendo Switch.

Step 3: Save Images To Phone From Browser

Your media haven’t actually been transferred yet though. Rather, you can simply view them on this webpage — it’s still your job to actually go ahead and save any of them to your device.

This is easy to perform, just tap and hold on a photo to bring up a menu that should include some option along the lines of ‘Save’ or ‘Add To Photos’. For videos, a direct Download link will appear underneath. The exact directions here can vary by specific device, but you should hopefully already know how to save photos on your phone!

Alongside this Nintendo Switch update, a new USB Data Transfer option for sending screenshots and videos to computers has been implemented as well. We don’t expect this feature to be as popular, but if it fits your needs, check out Nintendo’s support article here.

We hope you find this guide to the handy new smartphone transfer feature for Animal Crossing and other games helpful! Let us know in the comments below if you think you’ll be finding yourself using this new option.