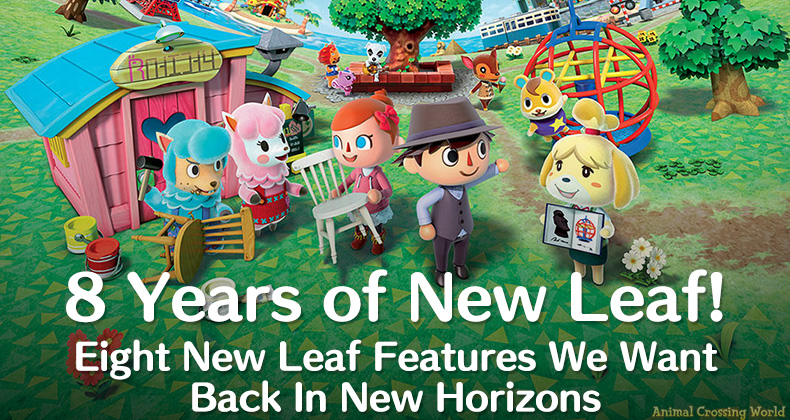 It’s hard to believe, but today marks eight years since Animal Crossing: New Leaf first launched on the Nintendo 3DS in North America all the way back on June 9th, 2013! Isn’t that just incredible?

With over 12.93 million copies now sold worldwide, New Leaf was the most successful game in the series until Animal Crossing: New Horizons conducted a hostile takeover with record numbers. It’s safe to say millions of current Animal Crossing fans were introduced to the series through New Leaf.

Animal Crossing World began its journey as a blog covering ‘Animal Crossing 3DS’ as it was originally called, so this birthday always means a lot to us. To celebrate, let’s go over eight of our favorite features from Animal Crossing: New Leaf that we wish to return in New Horizons someday.

Editor’s Note: Today’s article is a republishing of last year’s 7 Years of New Leaf post, with an additional 8th feature added to celebrate the 8th birthday. 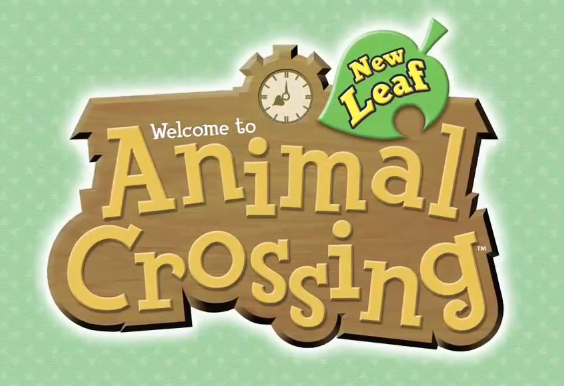 While there’s plenty of major features that are missing in Animal Crossing: New Horizons we’d like to see return, most of the main ones have been covered relentlessly already by others and apply to the series as a whole.

So in this article, we’re going to focus on features that were unique to Animal Crossing: New Leaf that we want back, including some smaller ones that have been forgotten by many or are unknown to some!

Online multiplayer has been a staple of the Animal Crossing series ever since its introduction with Animal Crossing: Wild World in 2005, but oftentimes there’s not really much to ‘do’ besides some fishing and touring your friend’s house. 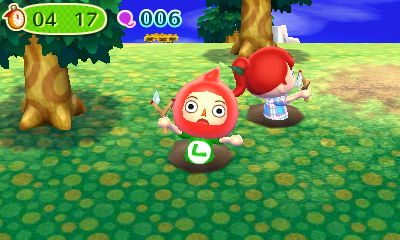 With the multiplayer mini-games available at Tortimer’s Island, New Leaf really went a long way to amend this problem by giving some more structured content to enjoy with your friends online. Plus, the medal rewards could fetch you some great items like the Mermaid series of furniture.

Impressively, these mini-games varied significantly between fishing and bug catching challenges, buried treasure mix and matching, flower gathering, balloon hunting, and much more. Sure, they definitely got a bit repetitive after enough times, but they still represent a lot of fun content New Horizons is currently missing. 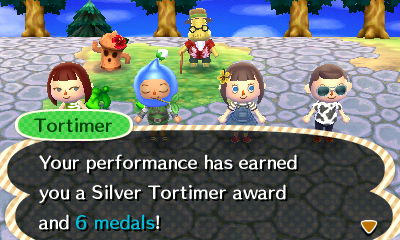 With the next New Horizons update likely to land sometime during the summer, it would seem that we’re primed for a possible update to add Tortimer’s Island soon — possibly at the currently unused pier on our beaches. Let’s hope!

Some of the most beloved items in Animal Crossing: New Leaf were the iconic Nintendo themed ones from series like Mario, Zelda, Metroid, Pikmin, and much more. By purchasing and eating a fortune cookie from Timmy & Tommy’s Shop, you could get a randomly chosen Nintendo themed item every day!

i miss all those neat little nintendo items you could get from fortune cookies in new leaf!!! pic.twitter.com/JJNx8DB2SF

Honestly, it feels inevitable that these Nintendo themed items will make their way to Animal Crossing: New Horizons eventually — it’s just a matter of time. Hopefully sooner than later!

2021 Update: In the March 2021 Update, the developers did introduce a series of Mario themed items to New Horizons, but arguably the best non-Mario items for Zelda and others are still missing.

Animal Crossing players rarely ever have enough space to show off their favorite items with only so many rooms available to decorate in your house. A great way that Animal Crossing: New Leaf allowed for even more decorating was through a set of custom Museum Exhibit Rooms rentable on the building’s second floor. 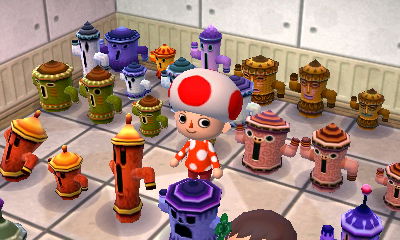 For a mere 10,000 Bells each, these 8×8 rooms can be fully decorated like any other room in your house and accessed by visitors of the Museum. Many players used these as an additional storage method, but you could use them for anything.

Throughout the history of the Animal Crossing series, the issue of the town’s shops opening too late in the day and closing too early in the night has always been a contentious point of concern.

Animal Crossing: New Leaf sought to address this concern, at least partially, through a new system of Town Ordinances that the Mayor could enact to change the rules around town. There were a variety of options, but two of the most prominent were Early Bird and Night Owl.

By enacting the Early Bird ordinance, shops would open around 3 or so hours earlier in the morning, while villagers would wake up from slumber earlier too. The same applied in reverse when activating Night Owl to keep the town bustling later at night.

Sadly, these ordinances were removed in New Horizons. One possible reason might have been the dropbox being introduced at Nook’s Cranny, but we’d still appreciate an option to keep the real shop open for a few more hours in the early morning or late night.

Train Station Lockers In Other Towns

Forgot to bring an important item over during a visit to a friend’s town or an online trade? No problem — the handy lockers at the Train Station (New Leaf’s version of the Airport) can access your entire house storage of items! 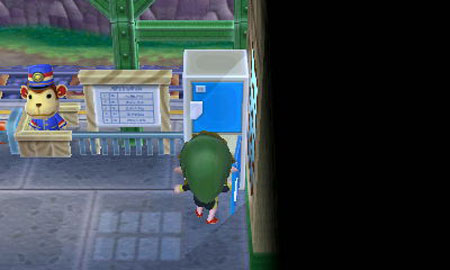 Having your complete item storage available when visiting another player’s town is an incredibly helpful feature, and we really regret its removal from New Horizons. This was one of the first things I noticed personally when playing online at launch.

The lockers at another town could even be used to retrieve turnips from your storage in New Leaf, making multiple trips to ferry turnips back and forth far less necessary. Oddly, turnip storage is no longer possible in New Horizons though.

While crafting hadn’t yet become a prominent feature in Animal Crossing: New Leaf, an early version existed through the ability of Cyrus to make select items when given the right materials. By far the best of these special ‘crafted’ items were the Music Boxes! 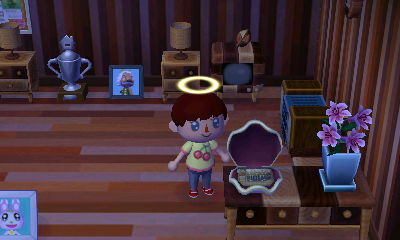 By giving Cyrus a Giant Clam Shell from your beach, 3,000 Bells, and a K.K. Slider song of your choice, he could create your very own little music box that plays a special tune based on that song. This cute box can sit anywhere in your house and play the tune when a player interacts with it.

Check out the amazing video below with music box recordings of every K.K. Slider song compiled:

We’d love to see these custom music boxes make their way to New Horizons, whether that be through the DIY Crafting system or the return of Cyrus beyond just the Wedding Season event.

Have you ever spent an embarrassingly long time searching your island for one particular villager because you had a gift for them or needed to complete a quest?

You’re not alone and Animal Crossing: New Leaf had a perfect Megaphone tool to solve this problem! Just take out the Megaphone and yell out the name of a villager on your island to see them respond with a speech bubble indicating the direction you need to head towards. 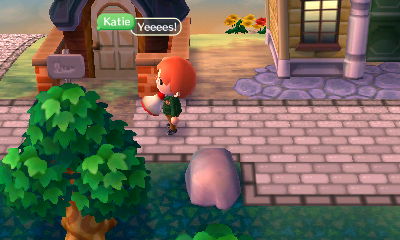 While the Megaphone tool in New Leaf made use of the built-in Nintendo 3DS microphone, a feature that doesn’t exist on the Nintendo Switch, there’s no reason this handy tool couldn’t still be implemented through a menu selector of your villager names. With New Horizons having one of the largest town sizes in the series, the megaphone would be a great addition.

2021 Update: Technically, there is a Megaphone item introduced in New Horizons now for the Super Bowl, but it doesn’t act as a proper ‘tool’ in the way New Leaf offered.

Alright, alright — I’m probably the only person on the planet who missed these in New Horizons, but this is my list of features and I like pitfalls!

The Tricky Pitfall Seeds in New Leaf were a sneakier version of regular Pitfalls that feature a much more subtle and smaller ‘star’ shape on the ground when buried. They’re equally tricky to find too and are only very rarely seen at the Police Station. 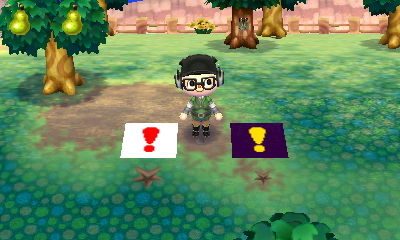 Pitfalls certainly aren’t an essential feature in Animal Crossing, but I’ve personally always had a lot of fun planting them in my friend’s towns and having the same favor returned to me. The tricky version was a neat twist in New Leaf, so I hope it doesn’t become a one-off to never return!

Once again, a very happy 8th birthday to Animal Crossing: New Leaf! Be sure to let us know in the comments below what other New Leaf features you’d like to see return in New Horizons that we left out.