August 2022 has arrived in Animal Crossing: New Horizons with the late summer season bringing new seasonal items and events to enjoy throughout August!

In this article, we’ll cover everything noteworthy and unique you can newly enjoy during August 2022 in Animal Crossing: New Horizons including the August Fireworks Show event, special seasonal items, new creatures to catch, and more.

The most notable event you can experience during August 2022 in Animal Crossing: New Horizons is the August Fireworks Show! This special occasion takes place every Sunday during August. You can participate in the event on August 7th, 14th, 21st, and 28th in 2022.

During the August Fireworks Show, enjoy beautiful fireworks in the night sky above your island while villagers mix and mingle around the Resident Services plaza! Custom fireworks can be set off as well with your input.

In addition to fireworks, you can find both Isabelle and Redd outside of Resident Services throughout the event with special items. Isabelle hands out special Bopper hats, while Redd sells raffle tickets for fun items like balloons, sparklers, bubble blowers, cotton candy, boba tea, and much more!

Read our complete August Fireworks Show event guide here, including a full list of items you can earn.

If you haven’t already, the first half of August gives you a second chance to pick up the Rodeo-Style Springy Ride-On seasonal item in Animal Crossing: New Horizons.

It’s available from Nook Shopping between July 15 to August 15th.

This seasonal item celebrates the Cowboy Festival seasonal event, which is a Brazilian cowboy holiday tradition.

Another cross-month seasonal event that peeks into August is the Cowherd & Weaver Girl Day holiday taking place from July 26th to August 4th during 2022. These dates can vary by year though, so take note if playing in another year.

Obon, an interesting Japanese holiday where it is believed that ancestral spirits return home, is celebrated in Animal Crossing: New Horizons from August 10th to 16th with two strange items.

Specifically, you can pick up these two bizarre limited-time seasonal items in Nook Shopping for Obon:

Closing out the end of August in Animal Crossing: New Horizons is the Tomato Festival seasonal event taking place from August 20th to 31st.

You can buy the Tomato Festival Tee from Nook Shopping during this seasonal event celebrating the La Tomatina festival held in Spain each year with a gigantic food fight!

As with almost every month in Animal Crossing: New Horizons, a selection of new creatures are available to catch when August begins. With the Summer season ending next month, there are fewer new creatures than normal though.

Specifically, the Northern Hemisphere has 3 new Bugs, 3 new Fish, and 1 new Sea Creature to catch during August! You can find the complete list right here, but a highlight is the adorable Soft-Shelled Turtle.

On the flip side, there’s only one new Bug to spot on Southern Hemisphere islands, which is a bit disappointing.

The summer Bug-Off event will return once again during August for the third time in 2022 near the end of the month on August 27th, 2022. (Northern Hemisphere only) During this event, special character Flick visits your island hosting a competitive tournament where you can compete to catch the most bugs under a three minute timer! 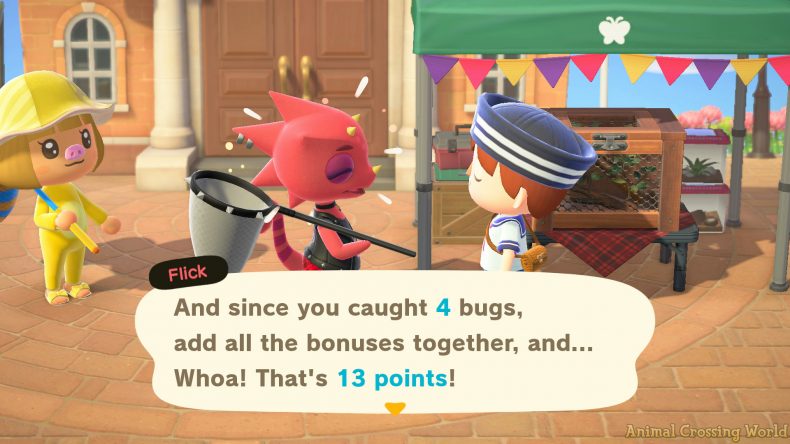 Sadly, there aren’t any new Bug-Off prizes to collect in 2022 though, so this event has little to offer for veteran players who already experienced everything last year. Read our complete Bug-Off Guide right here.

With the Summer season coming to a close soon, August 2022 marks the final month of the year that players can find Summer Shells in the Northern Hemisphere.

These distinctly blue Summer Shells can be found as a random spawn on the beach throughout June, July, and August in Animal Crossing: New Horizons and are used to craft special shell, sand, and water themed items.

Nine different Summer Shell DIY Crafting recipes can be unlocked by shooting down balloon presents from the sky allowing you to craft these items using the Summer Shells collected throughout the season. Read our complete Summer Shells guide here.