Bug-Off Event: Prize Items, Dates, How To Get Most Points

The Bug-Off is a recurring event taking place throughout the Summer season in Animal Crossing: New Horizons (ACNH)! Learn about all of the Bug themed prize items and how to get the most challenge points in our guide.

When you’re playing the game on one of these dates where the Bug-Off takes place, you’ll find the Flick special character setup with a tent outside of Resident Services beginning at 5AM when the day begins.

Although Flick can be found at Resident Services as early as 5AM in the morning, the actual Bug-Off event won’t actually begin until 9AM. And at 6PM sharp in the evening, the event will shut down meaning you’ll no longer be able to participate and earn points.

Finally, if you haven’t progressed far enough into the game to unlock the Resident Services town hall building and still have a tent, the Bug-Off event won’t occur on your island. However, you can visit another friend’s island to participate.

How to Play the Bug-Off

To begin playing in the Animal Crossing: New Horizons Bug-Off event, speak with the special character Flick outside of Resident Services and ask him to start a challenge!

You can participate in an unlimited number of time trial bug challenges from Flick and while the first one will be free, you’ll have to pay a 500 Bells fee to begin new challenges after that.

Once the challenge begins, you will have three minutes to try and catch as many bugs as you possibly can throughout your island! A timer and bugs caught counter will be displayed at the top of the screen to track your progress.

After the timer ends, talk to Flick back outside Resident Services to find out how many points you earned from bug catching. You get 1 point per bug caught, with a bonus 2 points awarded if you catch at least three bugs during the challenge! These points can be exchanged for exclusive Bug-Off items later.

In summary, these are the main important rules of the Bug-Off event you need to know:

For more helpful tips on how to get the most points during the Bug-Off, scroll down to the end of this guide!

Selling or Removing Bugs From The Bug Cage

When you catch bugs during challenges in the Bug-Off, your bugs won’t actually be added to your regular pocket inventory, but instead sent to the Bug Cage outside of Resident Services next to Flick.

This will save you the hassle of dealing with inventory space, but if you happen to catch a new bug that hasn’t yet been donated to your Museum, make sure to manually grab it from the Bug Cage before it gets sold.

Once you speak to Flick after the challenge, you can quickly sell the entire contents of the Bug Cage to him. He’ll pay you at a premium rate of 150% of the regular sell price for bugs, and you can sell bugs caught outside of the challenges to him as well. (select ‘Something else’, then ‘Can I sell you bugs?’ after your first challenge)

Remember that the Bug Cage must be cleared before a new challenge can begin, so you need to talk to Flick at least twice after each challenge to both earn your points and sell your bugs from the cage.

How To Exchange Points For Bug-Off Prize Items

The Bug-Off event in Animal Crossing: New Horizons features a new special set of exclusive items for participating in the event! After you’ve participated in one of the Bug-Off challenges and racked up some points, you can exchange for prizes and rewards.

To exchange your points for bug themed prize items, chat with Flick and select the “Redeem points” option. He’ll let you know how many points you currently have and allow you to exchange 10 Points for one exclusive Bug-Off item!

From our experience, you will always get one of each item forming a complete set from Flick before he’ll start to give you duplicates. Since there are 13 different items to get, you’ll need to earn and exchange at least 130 Points to get the entire Bug-Off prize items set!

You can exchange your points for 13 different Bug-Off exclusive insect themed items, plus variations for the Spider Doorplate! A complete table of all 13 items and their sell prices are available below including furniture, bags, clothing, accessories, and more.

Working your way through the event right now and want to make sure you get every item? Use the handy interactive checkboxes next to each item name below to keep track of your progress in a checklist — it’ll be saved to your browser!

You’ll get a random Spider Doorplate version from Flick, but the item can be customized to your choosing at a workbench later.

In addition to the merchandise that can be obtained by trading in your points to Flick, there are three bonus Bug-Off Trophy items available for reaching milestones of total points. If you earn one of these trophies, it’ll be mailed to you the next day.

By the way, spending your points in exchange for prizes won’t affect your total points for earning a trophy. When you reach a milestone after completing a challenge, Flick will tell you about about it!

If you’re not sure how many total points you’re at so far and how close you are to the next milestone, you can add up all of your prizes so far and multiply by 10 to estimate, since each prize costs 10 points. You’ll need to have spent everything of course.

How to Get More Points & Win The Bug-Off (Tips & Tricks)

Without fully optimizing your Bug-Off strategy, it’s difficult to earn more than 7 or so points in most challenge attempts. That’s not going to do the job though if you want to go for Gold ranking in a timely manner!

We’ve got a few handy tips on how you can get more points in every challenge run and rack up as many points as fast as possible.

Use A Variety Of Spaces Near Resident Services

To maximize the amount of bug spawns that you can find, we recommend keeping a variety of different areas in close proximity to Resident Services. That means you’ll want an area or two with many flowers for Stink Bugs and Mantis to spawn, an open area for Butterflies, Grasshoppers, and Dragonflies, and a Trees area for beetles.

Bugs generally can’t appear in an area that’s within view on your screen though, so make sure that there is enough spacing between these sections so that bugs can spawn while you’re in another area. If you place these different environments around Resident Services, you should be able to walk in a loop finding plenty of insects to catch.

One of the best ways to easily get more points in a challenge run is by playing the Bug-Off together with friends online or in local wireless! Not to mention, the event grind is way more fun with some pals.

When you play a challenge together with friends, an additional bonus of up to 10 points is awarded for the bugs you caught together as a group. (5 points for 5-9 bugs, 7 points for 10-14 bugs, 10 points for 15+ bugs) Then the regular points you’d earn in single player for your own bugs caught are added too!

Because of this, you can usually get more points in challenge attempts than you would on your own in single player, so we highly recommend playing the Bug-Off with friends if possible.

It is worth noting however that there is some level of diminishing returns to playing with many friends since the bug spawn rate doesn’t seem to increase with the number of players.

At a certain point, you may find multiplayer to be less effective especially when taking into consideration the amount of time it takes for each person to collect their points and sell their bugs to Flick each time. From our experience, you reach this around 4 players, with the optimal amount being about 2-3 players.

By the way, just in case the bonus points weren’t enough of a reason, the challenge entry fee does not apply when playing challenges in multiplayer, so you can even save a bit of money at the same time.

Furthermore, we’ve noticed that it’s possible for someone to earn the group bonus points even if they don’t catch any bugs. So if you’re feeling generous, you can actually let one of your friends leech some free points while you do all of the work!

Move Quickly Across Your Island

Since there’s no Fish Bait you can use like in the Fishing Tourney, we recommend putting your effort into moving around quickly to allow for new bugs to spawn and appear. There’s no point in staying in a small area waiting for more, just stay on the move throughout the entire challenge!

Focus On Quantity, Not Quality

When you’re playing the Bug-Off event, you need to reverse your usual bug catching mindset in Animal Crossing: New Horizons. It’s easy to become accustomed to ignoring anything that’s low value and common because they’re a waste of time for Bells, but that’s a mistake during this event.

In the Bug-Off challenges, every type of bug is valued at an equal value of 1 Point each, regardless of normal value at Nook’s Cranny. So don’t waste your time on those Dragonflies bolting around the map for a full minute, just catch those Common Butterflies instead!

Some Bugs Are Easier Than Others

Speaking of quantity versus quality, you should focus on the easiest and least time consuming bugs to catch. For example, the Butterflies tend to be very low effort and aren’t effected by your running speed.

On the other hand, bugs like the Dragonflies, Grasshoppers, and Pond Skaters can move around way too much essentially baiting you into a huge waste of time. Sometimes you can spend a whole minute trying to catch one, and still never get it!

So stick to the bugs that appear to be easier to catch, and learn when to cut your losses if you’re struggling to chase a tricky bug down.

Find A Bug Before Challenge Starts, When Playing Multiplayer

If you’re playing the Bug-Off in multiplayer with some friends, only one player needs to speak to Flick for the event to begin. That means if you’re not the one starting, you can cheat a little by finding a bug somewhere beforehand.

Then when your friend activates the Bug-Off challenge, you can catch that bug and you’ve already got yourself a free point right away!

While free flying bugs like Butterflies can be some of the best to catch, you shouldn’t forget about insects that exclusively spawn on trees and flowers too. In particular, the Drone Beetle is a very common bug that only spawns on trees. If you have some white flowers, the Orchid Mantis is a good one to watch out for as well. 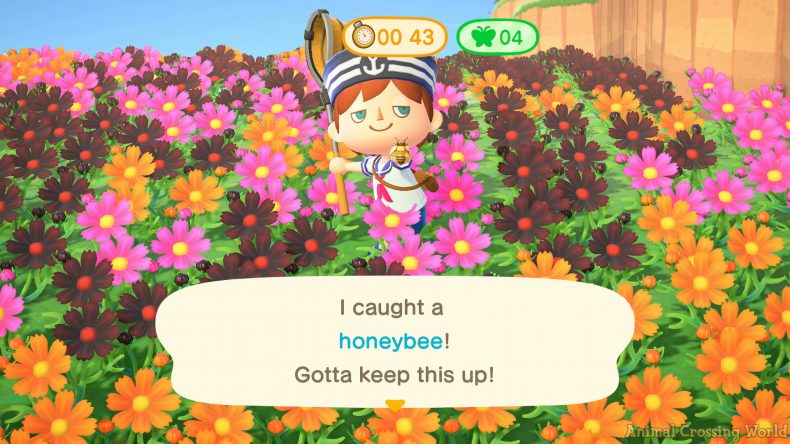 If you’re really dedicated to the event, you could make some landscaping changes to your island for better optimization. We’d suggest making sure you do have trees and flowers that are easily accessible with no items or fences blocking the area in front of them.

Special thanks to Mogyay, Dizzy, and Ossiran for contributing information or photos to this guide! Have more details to share that we’re currently missing? Help us out in the comments below!