K.K. Slider Songs / Requests List & How To Get New Songs

K.K. Slider is everyone’s favorite travelling musician in Animal Crossing: New Horizons bringing music to all! We have a complete list of every K.K. Slider Song you can request, including some secret songs, and how to get them in this guide.

You can find K.K. Slider performing outside of Resident Services on your island every Saturday night (requests begin at 6PM) once you’ve unlocked the Island Designer tools.

While he can play any random song if you’d like, we recommend requesting a specific song using the ‘Gimme that one song’ option to help build your collection. For more details on how to get K.K. Slider songs, scroll to the bottom of this guide past the song list.

Complete List of All K.K. Slider Songs in New Horizons

The table below contains the complete list of all 95 K.K. Slider Songs you can collect from the man himself in Animal Crossing: New Horizons. If you are requesting a song to K.K. Slider for a performance, remember that song titles must be entered exactly as shown here to work!

As an added bonus, the list below is a fully featured interactive checklist with checkboxes that you can use to keep track of what K.K Slider Songs you own so far! The data will be saved to your browser and may be lost if you clear your browser data.

Having trouble getting K.K. Slider to play the song you’re looking for? It’s important that you always make sure you’re entering the song title to him EXACTLY as we’ve shown on our list here — including exact spacing and any punctuation like periods!

As an example, ensure that you type in the proper “Go K.K. Rider!” instead of a more simpler “Go KK Rider” to get the right song. You should always look over what you’ve entered before pressing submit if you don’t want to make a mistake.

In addition to the regular everyday K.K. Slider Songs that can be randomly played when you leave it up to him, request a mood, or purchase a song from Nook Shopping, there are a few extra special tracks out of the norm.

How To Get Three Secret K.K. Slider Songs

There are three different secret K.K. Slider Songs in Animal Crossing: New Horizons that you can only hear and get an album by entering in their names with a request.

Just type out one of the following three Secret Songs listed below to K.K. Slider when asking for a special request using the ‘Gimme that one song’ option:

Afterwards, you’ll get a copy of the track for use in your own music players, but only one can be obtained per week.

How To Get K.K. Birthday

The K.K. Birthday song cannot be requested at a concert or purchased at Nook Shopping normally. When your real life birthday comes, assuming you set up the date correctly with Timmy & Tommy, your very own personal K.K. Slider concert will be performed!

After the special birthday performance, K.K. Slider will give you the K.K. Birthday track for safekeeping.

The Wild World song is an excellent track based on the theme song to Animal Crossing: Wild World on Nintendo DS, but unfortunately you can’t actually obtain this track as an aircheck since the item doesn’t exist.

Technically speaking, you can’t specifically request the Wild World song either as it is an error track, which are unique songs randomly played when you incorrectly enter a song name in a request to K.K. Slider. But since there are only a few different error tracks, there’s a good chance you’ll hear it anyway when requesting ‘Wild World’.

The Welcome Horizons is a track that resembles the official title screen theme song for Animal Crossing: New Horizons. You’ll receive this track from K.K. Slider after the very first time he performs on your island.

If you’re reading this guide, it’s almost guaranteed that you already own this track. But if you happen to lose the Welcome Horizons song for any reason though, you can get another by requesting Welcome Horizons to K.K. Slider.

How to Get & Unlock New K.K. Slider Songs

There are two main different ways to obtain new K.K. Slider songs in Animal Crossing: New Horizons. Once you get a new song, you can register the track into a music player furniture item and play the song at any time!

Starting from your first full day on the island, you can begin purchasing K.K. Slider songs from the Nook Stop terminal inside of Resident Services. Just head into the Nook Shopping menu and select Special Goods to find a K.K. Slider song available for purchase at the bottom of the menu. 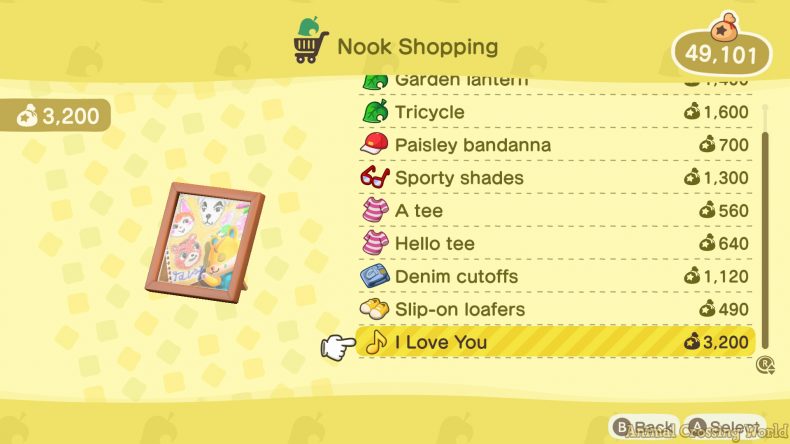 Each day, a new random K.K. Slider song will be swapped in to your Specials Goods section of the Nook Shopping menu to buy! The song that appears here is unqiue for every player too, so you can trade with others easily using the Order As Gift function!

Bonus: If you’ve purchased enough items from Nook Shopping, you can unlock a special app on your NookPhone allowing you to purchase new songs from anywhere!

After you’ve completed the ‘Project K’ dream of Tom Nook’s and K.K. Slider has preformed his first concert on your island, he will start appearing on your island as a visitor!

Every week on Saturday, you can find K.K. Slider hanging out with his guitar playing tunes in front of the Resident Services building. However, it’s not until later in the evening that you’ll be able to start requesting songs.

Note that on Saturdays when there is another notable event happening outside of Resident Services, such as the Fishing Tourney or Bug-Off, K.K. Slider will instead appear on the Friday before.

Beginning at 6PM local time on your island, K.K. Slider will begin to accept requests for concert performances with yourself and any friends you might have with you! You can choose between a random song, a random song according to a mood, or a requested song of your own choice.

After K.K. Slider has played your first requested song for the day, he’ll kindly provide you with your very own version of the song to put in a music player! If you have friends over on your island, he’ll mail it to you the next day.

Unfortunately, you can only get one K.K. Slider song per week by using this method, so choose wisely what you request! And make sure to catch him before he leaves after midnight local time.