Don’t miss out on the first Animal Crossing: Happy Home Designer DLC released outside of Japan before it goes away!

Watch us build Louie’s home who is the very first DLC character to come to Animal Crossing: Happy Home Designer in North America. We’ll have our full article on this and how you can get himself yourself later today.

Nintendo has announced new promotions for both 7-Eleven and Monster Hunter DLC items in Animal Crossing: Happy Home Designer, at least in Japan.

There’s just 3 more days left to pick up a free Sushi Platter item from any Nintendo Zone location in North America. Just head to a location, and ask Pelly at the Post Office for a present. Assuming you’ve already received this month’s worldwide Rice Plant Bed DLC, you’ll get the Sushi Platter item.

To be clear, this item isn’t entirely exclusive to Nintendo Zone distribution, but it’s by far the easiest and cheapest way for a player in North America to get it. It’s regularly sold as an item in Timmy and Tommy’s store in Japanese version of the game.

For more information about the Nintendo Zone service, and where you can locate one, click here.

The October monthly DLC item for Animal Crossing: New Leaf has been revealed! Starting October 1st through October 31st, players in North America , Japan, and Europe can pick up the Rice Plant Bed furniture item at the Post Office from Pelly.

This is a normal DLC release, there is no Nintendo Zone or Best Buy requirement. Note: European release period was only through October 14th. 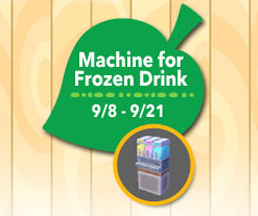 The latest DLC item for Animal Crossing: New Leaf, the Moon Vanity, is now available to download in all regions from September 1st to September 30th. Pick it up yourself by talking to Pelly at the Post Office and asking for a present!

Let’s hope Nintendo keeps the monthly DLC coming throughout the year. Any guesses for October’s item?