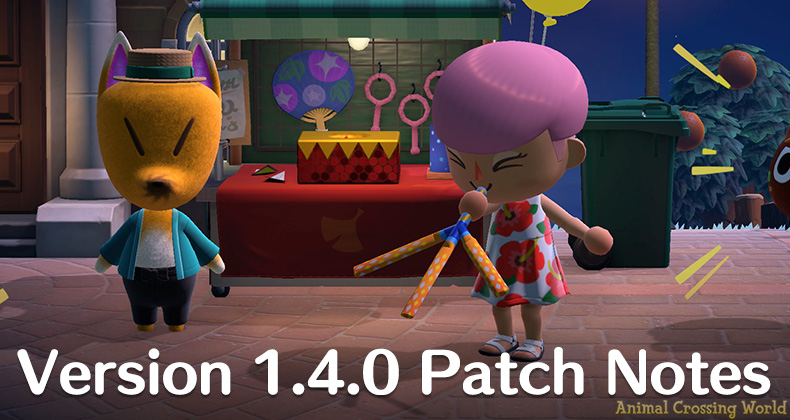 The latest Summer Update Wave Two for Animal Crossing: New Horizons has just been released for download today marking the third major update to the game since launch day!

This fresh major new update upgrades Animal Crossing: New Horizons to Version 1.4.0 bringing several major additions to the game including a brand new Fireworks Show event taking place during the month of August with Redd and the ability to enter the Dream realm with Luna to visit other islands.

In addition to those major advertised features, the patch notes reveal that the previous Camera App HUD Glitch has been implemented as an official feature by pressing the right analog stick! Additionally, a new Nook Inc. Handheld Pennant item resembling Tommy’s flag has been added in the Nook Mile Exchange.

Besides that, the typical mention of adjustments and bug fixes is included, although we’re not quite yet exactly what. In particular, we’re curious to see whether the Trees On Cliff Edges and Access 4th Level Cliff glitches have been patched or not.

Regardless, we know that many of you will be searching to find the full patch notes anyway, so we’ve included them here.

The full official patch notes from Nintendo of America in English for the Version 1.4.0 update of Animal Crossing: New Horizons can be found below:

The software has been updated if you see “Ver. 1.4.0” in the upper-right corner of the title screen.

A previous version of this article featured roughly translated notes from Japanese as a placeholder, but it has since been updated with proper official English notes from Nintendo of America.

You will need to be updated to Version 1.4.0 to play online multiplayer with other players and access other network features. Local multiplayer can only be played with others on the same version of the game as you.

Both of the previous major updates for Animal Crossing: New Horizons released back in April and July have contained a number of smaller changes that weren’t mentioned in the patch notes.

These undocumented changes in the update included adjustments to the Bank of Nook savings account, the ability to play multiple different K.K. Slider songs outside on speakers items, new items in the Nook Stop Terminal, quality of life improvements to Saharah, and more.

We’re expecting the same will likely be the case in the Summer Update Wave Two and will be documenting any secret or unmentioned changes and additions. Here’s what we’ve uncovered so far prior to the update based on small details released in the press releases and the Japanese announcement:

Please let us know in the comments below if you spot any more interesting small changes or additions that haven’t been mentioned already, so we can update this article as the best resource!

After you’ve had a chance to play around with the Summer Update Wave Two, be sure to let us know in the comments below what you think and if you’ve noticed any other changes not covered by Nintendo in the official patch notes!