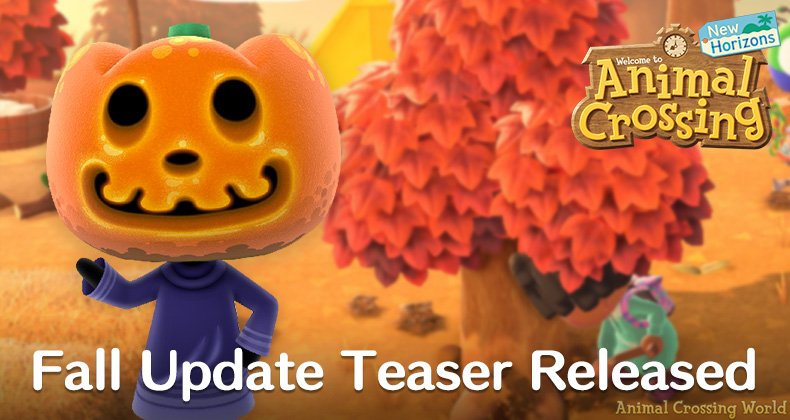 News on the next major update for Animal Crossing: New Horizons has been extremely tight lipped ever since the August Fireworks Show update was released, but we’ve got a small new teaser today!

Despite the update having not yet been released, Nintendo chose to drop a small tease for the previously announced Fall Update in this article. Notably, it’s said that the update is “around the corner“, presumably meaning the release may be imminent!

In terms of what content will be found inside the update, a couple extra small details are revealed in the blurb. We already knew from the last update trailer that a Halloween event would likely be introduced with Jack, but now it’s been confirmed further!

And while it’s no surprise at all to expect the upcoming Halloween event as it’s been previously teased, the specific plural wording would seem to imply there will be multiple new events included in the update.

Could this mean that the Harvest Festival event for Thanksgiving will be bundled into the same update? Or will there be some new minor new events similar to what we saw back in the Spring with May Day and Wedding Season? We’re certainly excited to find out!

Here’s the complete Animal Crossing: New Horizons related excerpt found in Nintendo’s Get back in your game with free updates article on the Canadian version of Nintendo’s official website:

It’s time to celebrate the fall season in the Animal Crossing™: New Horizons game—which means there’s another free update around the corner. Be prepared for seasonal in-game events and activities, plus some spook-tacular tricks and treats!

As of press time, we could only find this post published specifically on the Canadian version of Nintendo.com — it’s not available on the regular United States version. This leads us to believe that there may be a mistake here and expect it could be removed soon.

Special thanks to our friend Dramakins for bringing this find to our attention!