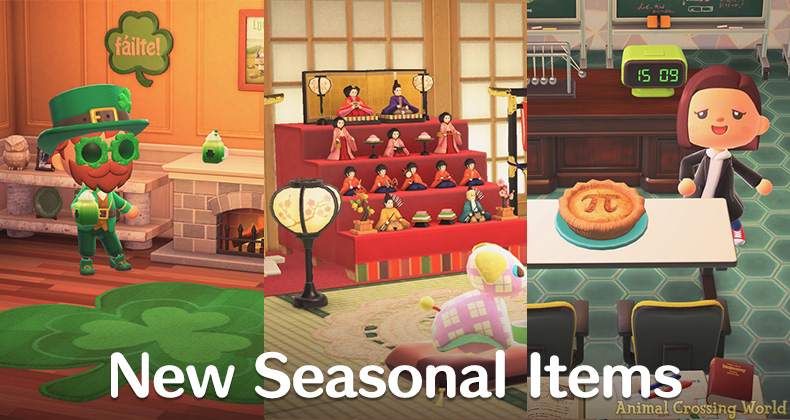 Brand new seasonal holidays item are on their way to Animal Crossing: New Horizons beginning next week when the Mario Update releases!

Although the Mario Update was just revealed in a Nintendo Direct presentation earlier today, Nintendo neglected to include a few new additions in the update trailer choosing to hide them away on their Japanese website instead.

So if you were concerned that the Mario Update would feature nothing more than just the new Super Mario items, fear not as there are still a few more surprises in store!

First up, the Hinamatsuri Festival holiday in Japan (also known as Girl’s Day) will be celebrated by Animal Crossing: New Horizons on February 25th, just after the update is released.

This holiday will introduce two new items — the Hinaningyo and Blossom Lantern, both available from February 25th to March 3rd. Only one item will be available at a time though, so check back on multiple days.

Then next month in March, a sort-of holiday that we certainly never expected to be celebrated in Animal Crossing: New Horizons will receive an item — Pi Day!

If you’re not familiar, Pi Day is an annual celebration that occurs every year on March 14th as it is the date where ‘3/14’ lines up with the mathematical constant of Pi beginning with 3.14.

To mark the occasion, a special Pi Day Pie furniture item will be made available to order from March 1st to 14th. It seems to resemble a homemade baked pie with the Pi symbol in the middle!

These green seasonal items for the event include the Shamrock Rug, Shamrock Doorplate, and Shamrock Soda all available from March 10th to 17th.

Additionally, you can find Shamrock themed clothing including Shamrock Hat, Shamrock Shoes, Shamrock Suit, and Shamrock Sunglasses available for purchase at the Able Sisters shop during the same time period as well — you can see these worn in the screenshot above!

Finally, just about every Animal Crossing: New Horizons update so far has come with a thank-you gift in the mail (such as Maracas in the January Update), and the Mario Update will be no exception.

After updating to the Version 1.8 Mario Update releasing on February 25th, all players can look forward to receiving the Mushroom Mural item from Super Mario as a thank-you gift in their mailbox.

Despite the rest of the Super Mario items being planned for availability on March 1st, you’ll be able to get started ahead of time with this fun item.

While none of the new seasonal items covered here are likely to rock anyone’s socks off, it’s certainly nice to see that the Mario Update will have a little more to offer than what was revealed in the latest Nintendo Direct!

If you were disappointed at all by the Super Mario item reveal today, including teleportation warp pipes, let us know in the comments below if this changes your view at all.

Special thanks to Ossiran for assisting us with accurate translations into English from Japanese for some names in this article.