How To Build A Perfect Snowboy / Snowman Every Time 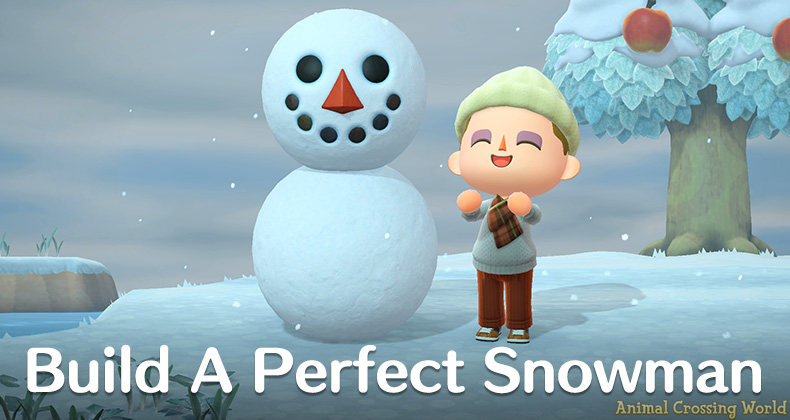 During the Winter, you can roll Snowballs to build a Snowman in Animal Crossing: New Horizons (ACNH)! Learn the best ways to build a Perfect Snowboy every time and see all of the DIY recipe rewards in this guide.

How To Find Snowballs

You can build a Snowman or Snowboy in Animal Crossing: New Horizons when your island’s ground is fully covered in snow during December 11th to February 24th in the Northern Hemisphere or June 11th to August 24th in the Southern Hemisphere.

Each day while your island is covered in snow, two Snowballs will appear somewhat close to each other in a random open location. If there’s no open spaces on an island, Snowballs might not be able to spawn, so you may need to remove some decorations.

Note that if you are playing multiplayer online with your gate open, Snowballs cannot appear on your island. If you can’t find Snowballs anywhere, try saving and reloading your game to get a new location. Watch out for Dung Beetle bugs as well.

If you break or destroy your Snowballs in any way, simply enter a building like your house and come back outside for new snowballs to appear somewhere. Beware of rolling or kicking Snowballs into any rivers or trees in particular.

After building a Snowboy, no more snowballs will appear on your island until the next day, meaning you only get one chance at building a Snowman each day.

How To Build A Snowman

When you have found your two Snowballs near each other, start giving them a kick by bumping into each one repeatedly until your kicks turn into rolling. It takes about 13 kicks on snow covered ground to begin rolling.

Be careful when kicking Snowballs as it can be easy to accidentally break them, so be sure to do so in an open area without hazards like nearby trees or rivers.

To grow your Snowballs in size, push and roll them on snow-covered grass. If you make a Snowball too large and wish to make it smaller, find a nearby area without snow like a path, beach, or the plaza to roll on to reduce the size.

You’ll want to try and grow one Snowball into a large size fit for a body, and then make the second Snowball into a proportionally smaller size made for a head. This is important because there are exclusive rewards for perfectly building a Snowman in the correct size.

Once you’ve grown two Snowballs into appropriately sized head and body shapes, simply bring them near each other and push the smaller snowball onto the larger one to build a Snowman!

The very first time that you build a Snowboy, he will be very impressed with your work and reward you with prizes, even if it’s not good enough to typically earn a prize. Don’t be mislead by this and expect that your future Snowmen will be as easily impressed every time!

How To Build A Perfect Snowboy

When making Snowmen during the Winter Snow Season in Animal Crossing: New Horizons, you’ll want to try and build a Perfect Snowboy as often as possible to get exclusive Large Snowflake 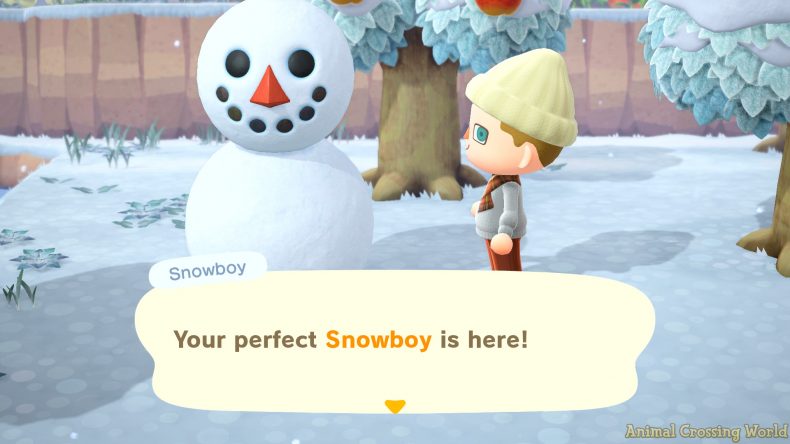 Building a Perfect Snowman requires getting the perfect ratio of size between your two body and head snowballs. You can try to just play this by eye with your own intuition, but we’ve compiled three different methods for easily making a Perfect Snowboy every time! Give them all a try and see which one you prefer.

Our preferred way to build Perfect Snowboy in Animal Crossing: New Horizons is what we call the Time Method! Rather than trying to carefully judge the size of each Snowball, this method only requires you to simply count the amount of time that you roll them in the snow.

It’s easy to do this by just carefully counting seconds in your head or aloud, but you can also use a countdown or timer app on your phone for example to help with getting the timing just right.

Make sure to only count the time that your character is actually pushing the Snowball forward with their hands — the initial kicks don’t count towards this time. It’s also important to take into account the additional time of rolling the head onto the body if you choose to ‘prepare’ each Snowball first.

Keep in mind that a Perfect Snowboy is created by perfect proportions, not perfect exact size, so other similar ratios of time may work well too. Let us know in the comments below how this goes for you.

Another great way to build a Perfect Snowboy in Animal Crossing: New Horizons is the Path Method. You’ll need a decently open area on your island free of decorations to pull this off, but it guarantees perfect results every time.

Start by finding a large horizontal space and use the Island Designer app to place a row of 10 paths down — you can use dirt, brick, wood, or anything else. If you have trouble counting the number of spaces, dig holes in the ground using your shovel to count the tiles.

Next, roll two Snowballs into their largest possible size and place them on each end of your row of path tiles. You’ll know when a Snowball has reached maximum size if your character pushes slowly in the first couple seconds of the rolling animation.

Make sure that each Snowball is spaced a little bit apart from the edges of the path, and roll one of them in a straight line all the way across your paths until it hits the other building a Snowman.

When you roll a Snowball over a pathway, it gets smaller in size as the ground isn’t covered in snow, making for a perfectly sized head Snowball by the time it’s been pushed over 10 tiles. Both Snowballs need to start at maximum size and there should be a little spacing on each end for the trick to work.

Special thanks to ninco7 on Reddit who first discovered this technique.

The most popular method for building a Perfect Snowboy in Animal Crossing: New Horizons is to use your own ears as a height indicator for your Snowballs to ensure they’re at the correct size.

First, begin rolling one Snowball into the largest size possible. You can confirm that your Snowball is at maximum size by looking for your character pushing it slowly in the initial rolling animation.

For your second Snowball, start cautiously rolling it until it builds into what appears to be a medium size, and stop to check your character’s ear lobe height with the Snowball height. It’s easiest to do this by tilting the camera with the right analog stick.

You’ll want to look for the top of the smaller Snowball to match horizontally with the very bottom of your character’s ear when standing next to it. Check the line in the screenshot above for an example — those Snowballs produced a Perfect Snowman for us.

If it looks like you have a close enough match, roll your smaller Snowball head right onto the larger Snowball body and you should land yourself a Perfect Snowman. If the heights don’t seem close enough, make the smaller Snowball smaller or larger first by rolling it on either a non-snow or snow covered surface.

Finally, it’s worth noting that there is no such thing as a perfect exact size of Snowball — only ratios and proportions. That means you may find success using a different combination of height comparisons, but this is the method we personally found to produce most consistent results!

It’s important to build a Perfect Snowman every single day to ensure you get a Large Snowflake with a new DIY Crafting Recipe learned, or at least until you have the entire collection of recipes.

Sometimes you’ll make mistakes though as it can be quite difficult to master the skill of building a Perfect Snowboy, and you can normally only build a Snowman once per day giving you a single daily shot.

But if you do mess up, there’s good news! It’s super easy to reset your game and try again in the same day if the Snowman you build isn’t perfect. Then you’ll get the Snowballs respawned to try again.

The first moment that a new Snowman speaks to you, he’ll make it very clear whether you built him perfectly or not. So if he doesn’t indicate perfection, immediately hit the HOME button on your controller and press X to close Animal Crossing: New Horizons.

Make sure to check for the little spinning circle in the right before resetting though to be sure the game isn’t saving in that moment. If so, we recommend refraining from performing a reset to avoid any possible save corruption,

The vast majority of the time, this reset method should work great, but it is possible to get unlucky and have the game save at the wrong time where resetting is a bad idea.

There are 16 different Snowboy exclusive Winter Snowflake DIY recipes to collect, and each requires one Large Snowflake to craft. (one recipe newly added in 2021’s Version 2.0) So you’ll need to build at least 16 different Perfect Snowboys to unlock and get every exclusive item!

In addition to the Snowman exclusive DIY recipes listed above, there are another 10 recipes that can be found in Balloon Presents during the Winter Snow Season. Two recipes were newly added in Version 2.0 released during November 2021.