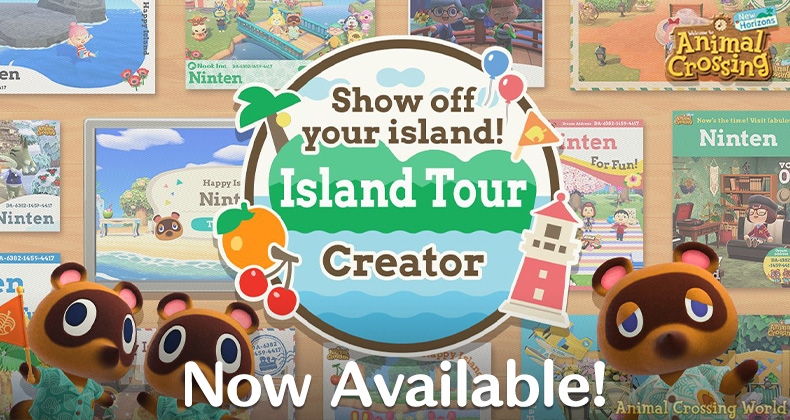 Now available as a web service, the Island Tour Creator can be accessed and enjoyed at tanuki-kaihatsu.com with a smartphone device, but isn’t available on desktop.

There are two types of creations you can produce using the Island Tour Creator — posters and trailers. In either case, you’ll be asked to pick out Animal Crossing: New Horizons media you’ve captured, and add your island name with a tagline and dream address.

With Posters, you can use a single in-game screenshot and choose one of Nintendo’s 9 frame designs for it. The screenshot’s positioning and zoom level can be adjusted too, plus the frame’s color scheme.

In the end, the Island Tour Creator will produce a poster for your island that includes your chosen screenshot in the desired frame, with the island’s name, tagline, and dream address on top.

For a more advanced approach, another option is creating a Trailer that can combine both multiple screenshots and video clips for your Animal Crossing: New Horizons island into a video.

When making a Trailer, you’ll be asked to select up to three different themes to be included from the following: Photo Op, Museum, Fashion, Events, Home, Items, Faves, Neighbors, and Scenery.

Then you can add up to three screenshots or a single video clip for each theme previously selected. Video clips must be at least 10 seconds long, and will be trimmed down to this length with a built-in video editor.

After you’re finished, the Island Tour Creator will automatically edit all of the screenshots or videos provided together into a 1 minute long trailer of your island showing it off with narration.

When you’ve created either an island poster or trailer, you’ll want to download it from Nintendo’s website, then share it on any social media sites of your choosing. This is important as Nintendo will delete it from their own servers after just 48 hours.

For players who are Twitter users, the Island Tour Creator offers an amazing feature that allows you to link your Twitter account to the service. After linking, all of your recently posted screenshots and videos will be available to select when creating a poster or trailer.

If you aren’t interested in using Twitter, you can also manually upload screenshots and videos to the service from your device — preferably after easily transferring using the Nintendo Switch’s Send to Smartphone feature added last winter.

Overall, we found the new Island Tour Creator to be a fun little addition for Animal Crossing: New Horizons players to play around with and show off their island — especially for sharing Dream Addresses!

But more advanced users are likely to be a bit disappointed by the limitations of the service in our opinion with relatively few options available for customization.