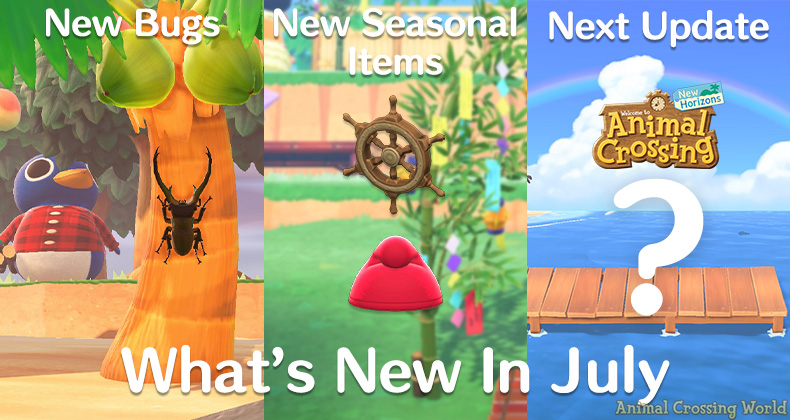 July has arrived in Animal Crossing: New Horizons with the continuation of Summer bringing new seasonal items to collect and other returning content, plus a new update coming soon!

In this article, we’ll cover absolutely everything noteworthy to enjoy during July 2021 in Animal Crossing: New Horizons — including brand new items for veteran players, and returning activities for newer players.

Last year’s Tanabata seasonal event has returned to Animal Crossing: New Horizons for the first seven days of the month until July 7th!

During this time, a special Bamboo Grass item is available to grab from Nook Shopping for a second year. This is a pretty special item as you can actually interact with the bamboo to read a piece of tanzaku written by a special character or villager!

Celebrated on July 7th, this is the one day that the deities Orihime and Hikoboshi–represented by the stars Vega and Altair– can meet. Write a wish on tanzaku paper, hang it from the bamboo, and wish on the stars!

A brand new Marine Day seasonal event can be celebrated in Animal Crossing: New Horizons from July 8th to 22nd!

For both veteran and new players, the new Ship-Wheel Door Decoration item can be purchased from Special Goods section of Nook Shopping for a limited time. As the name implies, this item can be placed on your house’s door as a decoration.

In Japan, Marine Day is celebrated as a holiday to give thanks to the ocean and appreciate its importance to the country as an island.

A brand new Le 14 Juillet seasonal event will be celebrated in Animal Crossing: New Horizons from July 10th to 20th!

For both veteran and new players, the new Phrygian Cap item can be purchased from Special Goods section of Nook Shopping for a limited time.

Unlike most other recent seasonal items, the Phrygian Cap item comes in five different color variations that you can view below — you’ll want to check Nook Shopping each day as the variations rotate:

In France, Le 14 Juillet is celebrated as a holiday marking a major turning point of the French Revolution.

During this time, the limited-time Rodeo-Style Springy Ride-on item will be available to grab from Nook Shopping once again.

Many countries have their own cowboy-themed celebrations, but this one is inspired by Brazilian traditions. We hope this springy ride-on toy will help you get into the spirit!

A huge wave of sharks and other new creatures entered the Northern Hemisphere in June, and now it’s time for bugs to make their mark in July!

Over 20 new bugs including cicadas, beetles, stags, and more can now be found during the peak of summer on your island to catch. Some of those stags can be quite valuable sold at Nook’s Cranny too!

Here’s some of the exciting new bugs you can expect to find on your Animal Crossing: New Horizons island in July:

Next Major Update In Late July

On a more exciting note, here’s a heads up on when you can expect the next major free update for Animal Crossing: New Horizons to release!

Based on past release schedules and knowledge of upcoming events programmed into the game, we expect the next update to be released in the latter half of this month between July 16th to 31st.

That’s because the final seasonal Nook Shopping event currently scheduled to be available is the Cowboy Festival beginning on July 15th, and historically updates have only released after the current schedule is exhausted.

Additionally, the Fireworks Show event should take place on every Sunday throughout the month of August, but isn’t currently implemented in Animal Crossing: New Horizons for 2021.

So with the first Sunday in August coming on August 1st, we fully expect that an update will be released prior to that date to implement the event. It’s hard to say specifically when that’ll happen though.

Of course, it’s no guarantee exactly what this next update will have in store. For all we know, it’ll simply contain the Fireworks Show and other repeated seasonal events for August with little other interesting content. On the other hand, the major update with new features our community is hoping for could always come too.

In conclusion, we really don’t know what to expect, other than something will come in late July! Keep an eye on Animal Crossing World as we’ll keep you up to date on the latest news whenever an update arrives.

The summer Bug-Off event will return once again during July for the second time in 2021 on July 24th, 2021. During this event, special character Flick visits your island hosting a competitive tournament where you can compete to catch the most bugs under a three minute timer!

Sadly, there aren’t any new Bug-Off prizes to collect in 2021 though, so this event has little to offer for veteran players who already experienced everything last year. New players are in for a treat though!

One last minor change you can look forward to during late July is a change to the seasonal bush rotation. Starting on July 21st, the Hibiscus Bushes on your island will begin to bloom as the Hydrangea flowers go back into hiding. 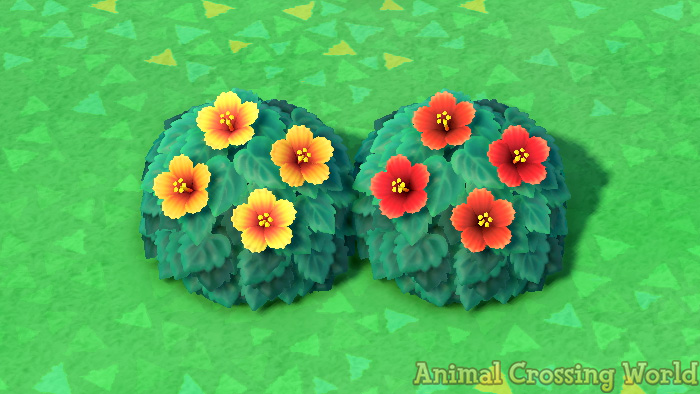 This change will remain for the remainder of the summer season all the way until September 20th when the Tea Olive Bushes come into play.