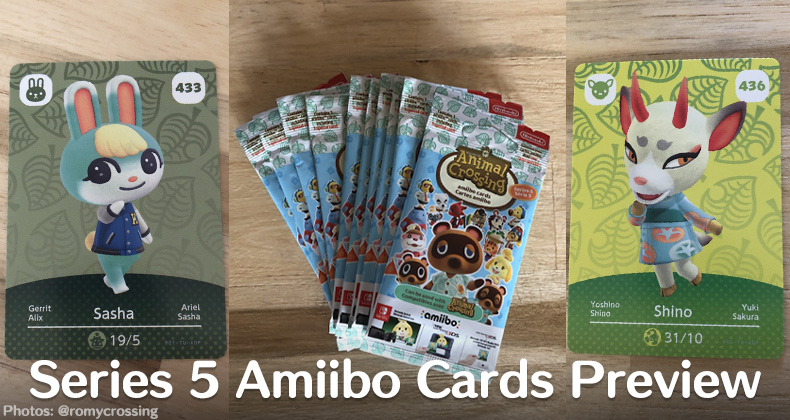 With the release of brand new Series 5 Animal Crossing Amiibo Cards just days away now, some copies of these fresh cards have already begun making their way out into the wild!

Even though they aren’t set to officially release for another two days from now on November 5th alongside the Version 2.0 Update, a few lucky Animal Crossing fans are already receiving early shipments to enjoy in advance of release.

One such fan, Romy (@romycrossing), shared her exciting haul of 10 Series 5 Animal Crossing Amiibo Card packs delivered in the mail! With 3 cards in each European pack, that shipment led to 30 different new Series 5 cards in total to reveal.

Thankfully for Romy, she had some INCREDIBLE good luck with opening those new amiibo card packs earning herself a copy of the popular new Deer villager Shino coming in Version 2.0!

That good fortune didn’t end with Shino either as later packs contained another two new villagers in Version 2.0 that are destined to be top tier favorites among Animal Crossing fans: Sasha the Rabbit and Ione the Squirrel!

WHAT IS MY LUCK?????? #acnh #AnimalCrossing #amiibo pic.twitter.com/kL8sXocXhG

On top of that, Romy picked up the most loved villagers introduced in the original version of Animal Crossing: New Horizons including fabled Raymond, Audie, Judy, Dom, and Sherb.

Even more impressive, there were no duplicate cards found at all within the 10 packs that she opened! Remember that the cards are randomly assorted allowing for some unfortunate duplicate possibilities to play out if you’re unlucky.

Lastly, for any curious minds out there, Romy confirmed to us that the existing villagers in Animal Crossing: New Horizons with new Series 5 cards like Sherb cannot be invited without the Version 2.0 Update. They aren’t recognized as supported amiibo by the current game.

These are all the cards I got!!
No doubles at all and I got all the series 5 villagers I really wanted on card, AAAAH 💕 #acnh #AnimalCrossing #AnimalCrossingNewHorizons #amiibo pic.twitter.com/c48E804Gdu

As a recap, the fifth series of Animal Crossing Amiibo Cards are set to officially release this Friday, November 5th! They come in packs of six random cards in North America, and packs of three random cards elsewhere including Europe.

Check out the complete collection of Series 5 Animal Crossing Amiibo Cards with all 48 different possible cards to get in our main article here!

Pre-orders are generally sold out right now for Series 5, but we’ll continue tracking availability at our pre-orders page here. New stock is often available at retailers on release day though, so be on the look out!

Thanks so much to Romy (@romycrossing) on Twitter for giving us her blessing to use these great photos in our article!