During the Q&A section of the most recent Financial Briefing, Mr. Iwata was asked about the sales potential of Animal Crossing: New Leaf overseas. He was quick to point that there are some core fans of the series overseas as well, not only in Japan.

Remember the Animal Crossing: New Leaf Japanese Direct a few months back? I’m sure all of you watched it and Iwata is no stranger to that. He mentioned that many customers worldwide watched the video and he received a lot of requests from overseas customers asking to be able to play it as soon as possible.

It’s good to know that Nintendo isn’t oblivious to the worldwide demand for New Leaf, they are certainly aware it exists. Miyamoto made a comment as well about how Nintendo is currently investigating how to best promote the game overseas. Let’s hope this includes bringing over the special edition 3DS XL bundle? : D

If you wish to read the whole Q&A, view the source link. Be sure to leave any thoughts you have in the comments below.

Yesterday was Setsubun in Japan and of course that means there’s a holiday in Animal Crossing: New Leaf for it! Keep reading to learn all about it:

We’ve reported on the Animal Crossing: New Leaf StreetPass puzzle in the past but now we have much clearer images of the completed puzzle. Read on to see the rest of the pictures:

Today we have a surprise new Animal Crossing Nintendo Direct from Nintendo with the Animal Crossing developers playing New Leaf in the winter! It’s rather long at 38 minutes so enjoy the video. We may have English subtitles in the future but for now it is only in Japanese.

A new set of promotional DLC items much like the previous 7/11 items were announced today as well. Click here to read all the details on that!

Along with the new Animal Crossing Nintendo Direct released today, a new set of DLC items for Japan were announced. These items appear to be part of a promotion for Kokuyo Camlin which is a company in Japan who manufactures stationery products such as pencils and art materials. Read on to learn all about them:

Iwata has dropped some sales numbers at the recent Corporate Policy Briefing revealing that Animal Crossing: New Leaf has passed 700,000 digital downloads sold in Japan as of December 31st, 2012

In fact, these sales make up one-fourth of the total number of Animal Crossing: New Leaf copies sold in Japan! For those curious, the total number sold as of December 31st, 2012 is just past 2.7 million.

There are several possible reasons why the digital copies sold are so high with this game:

Time will only tell if the digital version is as successful overseas as it was in Japan. Which version are you planning on purchasing? Digital or retail? Leave your answer and reasoning in the comments below! 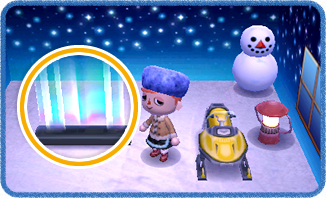 February is almost here and the first DLC item for the month has been revealed by Nintendo. Players of a Japanese copy of Animal Crossing: New Leaf can expect to receive an Aurora Screen DLC item starting on the 1st of February.

As can be seen in the picture, the item is reminiscent of the famous Aurora lights that be seen in the game and of course in real life as well! To receive the item, simply turn on SpotPass and speak to Pelly at the Post Office between February 1st and February 28th.

Stay tuned for another February DLC announcement within the next few days, and be sure to leave your thoughts in the comments below about the item!