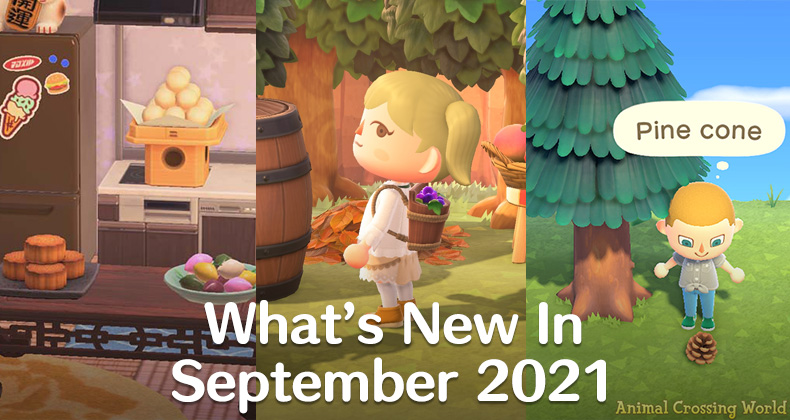 September has arrived in Animal Crossing: New Horizons this year with the beginning of Autumn season bringing both new and returning seasonal items to collect!

In this article, we’ll cover absolutely everything noteworthy to enjoy during September 2021 in Animal Crossing: New Horizons — including brand new items for veteran players, and returning activities for newer players.

For new players to the game since last Fall, the most significant new content to enjoy in Animal Crossing: New Horizons during September is a changeover of seasonal materials and DIY Recipes! After 3 long months of Summer Shells on the beach, players in the Northern Hemisphere can enjoy brand new Acorns and Pine Cones dropping from their island’s trees.

Specifically, you can now shake your traditional hardwood trees for a chance of dropping Acorns and the tall cedar trees for a helping of Pine Cones. By shooting down flying balloon presents across your sky, a fresh batch of autumn seasonal DIY Crafting recipes can be collected for using those new materials.

As for our friends in the Southern Hemisphere, they can now experience the  Young Spring Bamboo crafting material and recipes exclusively available during the Spring season now that the Winter has passed! Chopping bamboo trees with an axe can randomly drop special Young Spring Bamboo instead of regular Bamboo.

So no matter which Hemisphere you play in, there’s new seasonal content to enjoy this month in Animal Crossing: New Horizons as we enter either the Autumn or Spring season!

During this month, a special Grape-Harvest Basket item is available to grab from Nook Shopping for a second year. This is a pretty noteworthy item as it serves as a rare backpack accessory that’s far more useful for wear than yet another food furniture item to store away!

Inspired by festivities in Spain, Italy, France, and Germany, this fun festival sees participants don traditional garb for dancing and a large parade to celebrate the grape harvest. Please enjoy your ceremonial basket!

Be sure to wear a Grape Hat with your Grape-Harvest Basket to complete the look!

Another seasonal event from last year is returning this month in Animal Crossing: New Horizons with the Moon-Viewing Day event — but this one comes with fresh new items! It’ll be held from September 12th to 21st, 2021.

First, last year’s beautiful Moon Rug seasonal event item returns for 2021 if you missed it before making a great rug decoration for your floors.

But what’s more interesting is a set of two brand new items that weren’t available in 2020 for Moon-Viewing Day: The Moon Cakes and Dango!

Be sure to pick up all three items from the Special Goods section of Nook Shopping during the event period to celebrate this moon holiday.

A brand new Chuseok seasonal event can be celebrated in Animal Crossing: New Horizons from September 12th to 21st, 2021 — the same dates as Moon-Viewing Day!

For both veteran and new players, the new Songpyeon item can be purchased from Special Goods section of Nook Shopping for a limited time. Unsurprisingly, this is another food item to place on your kitchen table!

In Korea, Chuseok is celebrated as an autumn harvest festival holiday — not too dissimilar from Thanksgiving in other countries.

You’ll begin to encounter quite a few visual changes throughout Animal Crossing: New Horizons as we transition between seasons this month. Some of these are more pronounced for Northern Hemisphere players coming into Autumn, but changes are abound for everyone in September!

Perhaps most interesting, the entire storefront of the Nook’s Cranny building has received an Autumn makeover in the Northern Hemisphere with pumpkins and mushrooms on display by the windows. Plus, even more decorations can be seen on the inside on the walls and shelves! Timmy & Tommy are certainly getting into the season.

You’ll find that the design of weeds have been changed with the season as well, not to mention the minor yet cute touch of the game’s loading screen island icon changing to the new season.

And of course, we’ll begin to see the island grass slowly transition into a browner, autumn aesthetic later in the month.

Just like any other new month in Animal Crossing: New Horizons, the current selection of bugs, fish, and sea creatures available to catch on your island has been rotated around starting today. But since September marks a major season change from Summer to Autumn or Winter to Spring, it’s a more substantial switchover than usual.

Some of these critter changes are simply returning creatures that disappeared for a few months, while others are brand new and haven’t been seen for many months since the spring or earlier.

For a complete list of New Bugs, Fish, and Sea Creatures to catch in September for both hemispheres, check out our complete guide here!

The final Bug-Off event of the Summer season in 2021 will take place on September 25th, 2021. During this event, special character Flick visits your island hosting a competitive tournament where you can compete to catch the most bugs under a three minute timer!

Sadly, there aren’t any new Bug-Off prizes to collect in 2021 though, so this event has little to offer for veteran players who already experienced everything last year. New players are in for a treat though!

One last minor change you can look forward to during late September is a change to the seasonal bush rotation. Starting on September 21st, the Tea Olive Bushes on your island will begin to bloom as the Hibiscus flowers disappear with the Summer season. 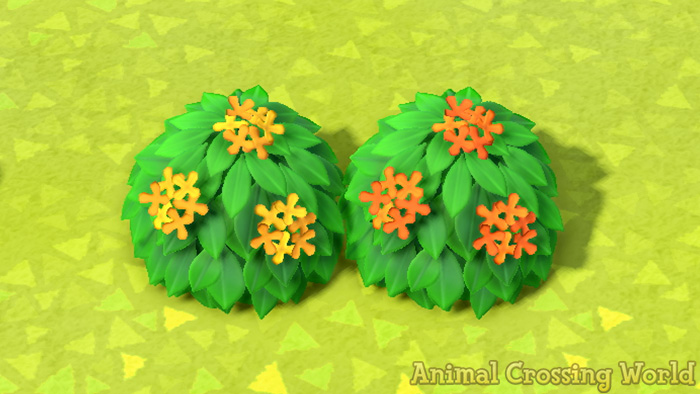 This is a relatively short-lived change though lasting for only just over a month until the Holly Bush arrives in November.

Will There Be A September Update?

Unfortunately, we’re not currently expecting a new major update to drop during September for Animal Crossing: New Horizons, leaving this month rather bare for veteran players with only a few new Nook Shopping items.

Nintendo has promised that more updates are still in development and will be coming eventually later in 2021, but we expect that won’t occur until sometime in November based on current in-game content. For more on what you can expect until then, check out our Upcoming Seasonal Items For August, September, October, November 2021 article here.