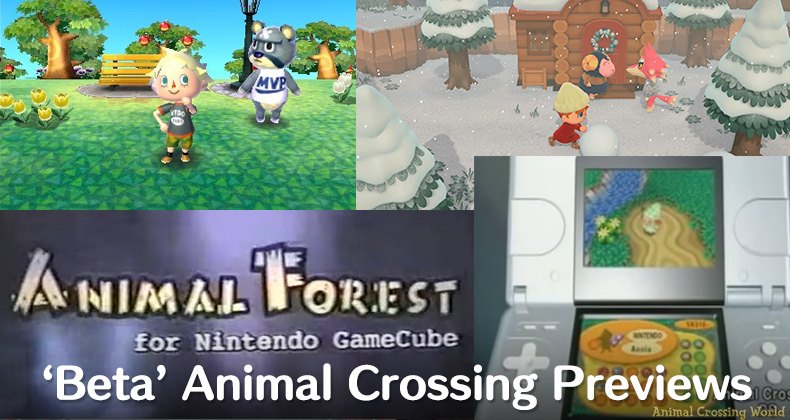 With only a couple days left until this year’s E3 2021 Nintendo Direct event, we’re taking a look back at the many early ‘beta’ screenshots and trailers that Animal Crossing games have seen over the years at E3.

Practically every Animal Crossing game has seen some kind of reveal at an E3 show, and oftentimes many of these previews have shown them in an early state quite different from their final form! In this article, we’ll cover early versions of Animal Crossing: Wild World, Animal Crossing: New Leaf, and more.

Animal Crossing for GameCube was first shown off to English audiences with a brief reveal at Nintendo’s E3 2001 presentation titled ‘Planet GameCube’. Most interestingly, it was revealed with the English title of Animal Forest — a direct translation of the Japanese game name!

Nintendo of America even created an English logo for ‘Animal Forest’ as seen above, but that title and logo were never used for the official release as the name was later changed to Animal Crossing overseas. Perhaps if it were released sooner, the title Animal Crossing would have never seen the light of day!

A few seconds of gameplay were shown off after the logo as well, and you’ll notice that there’s no Wishing Well present with the Bell Shrine displayed instead, as was the case in the original Japanese game. It’s not clear whether this means the Bell Shrine was originally intended in the English version, or if we’re basically just looking at the Japanese game with an English clock.

When Nintendo revealed the brand new Nintendo DS portable system for the first time at E3 2004, a preview for the tentatively titled ‘Animal Crossing DS’ was included with the announcement. Few details were explained about this new game, but a short video showed off some very early concepts for Animal Crossing on the DS.

We’re only speculating, but it seems likely that this early concept proved to be too graphically intensive for the DS hardware to handle leading Nintendo down the path of changing the art style into what we know with the ‘rolling log’ camera view.

The preview video also shows off some early concepts of using the innovative Nintendo DS touch screen to navigate through inventory menus, equip different items, chat on the keyboard with other players, and even designing patterns at Able Sisters. These all made it into the final game, although in refined forms.

Reflecting on the touch screen features, we can’t help think about how Animal Crossing: New Horizons oddly dropped most of these in favour of focusing almost entirely on traditional controls. It would have been great to offer touch controls when playing in portable mode as an option, just like Animal Crossing on DS and 3DS.

A year later, an updated look at Animal Crossing: Wild World was showcased at E3 2005 with another trailer, but honestly there are almost no differences worth noticing compared to the final game. So we won’t dedicate an entire section for E3 2005, but you can check out the video above.

The most interesting details are probably the tentative ‘Animal Crossing DS’ logo (something we rarely see happen anymore) and minor changes to the villager dialogue UI, a common theme in early Animal Crossing previews.

In a very similar manner to Animal Crossing: Wild World, another tentatively titled ‘Animal Crossing 3DS’ game was announced in an early form when Nintendo revealed the Nintendo 3DS system for the first time at E3 2010.

There was no grand announcement in the main presentation, but rather a quietly dropped set of screenshots on Nintendo’s press room site. Despite this, these early photos were surprisingly revealing of what the latest version of Animal Crossing on 3DS would bring us.

Right off the bat in the first two screenshots, fans spotted a brand new ‘side’ beach as a series first, with the rest of the town up on a cliff. This was remarkedly different from the town design in all past games.

Another outdoor scene revealed an early version of Public Work Projects with a pair of bench and streetlight projects on display in the town. In this iteration, the projects were surrounded by the classic grey pavement border, but thankfully was removed in the final game.

Besides the construction projects, fans noticed an interesting new design change for the trees and other nature outside compared to past games. This tree design didn’t survive though and was changed by the final version of New Leaf.

Finally, these indoor screenshots showing off villager homes decorated with furniture had fans focusing in on a major design change to the player characters on Nintendo 3DS. For the first time in the series, the player was a more natural tall human height!

As an extra bonus, a very short video was released by Nintendo at their September Conference later in the year. It’s mostly the same screenshots, but one detail worth noting is an early version of the bushes can be seen.

After a year of mostly silence, Animal Crossing: New Leaf made a glorious return at E3 2011 as Nintendo dropped a new trailer and screenshots online after their press conference.

Some pretty significant development progress can be spotted between the E3 2010 and E3 2011 versions of the game as new features like swimming and wall-hanging furniture, plus new characters like Isabelle, were revealed for the very first time!

The overall graphics feel quite refined, but those early tree designs seen at E3 2010 have managed to stick around for a while longer. Cedar trees are seen for the first time too, and happen to sport an much wider design than the final game. Along the lines of scenery, some of the flowers like Roses look quite different than what we know now.

That pavement we spotted around the Public Works Projects like benches at E3 2010 was removed as well. Nintendo made a point of showing off that the game’s many seasons were deep into development too, even including mushrooms around the trees during Autumn.

Overall, the E3 2011 version of Animal Crossing: New Leaf is remarkedly similar to the final game that released a year and a half later, minus some nature design changes.

Moving up to far more recent history, the reveal of Animal Crossing: New Horizons at E3 2019 came relatively close to release, so the earliest screenshots don’t show a very significant difference from the final game.

That said, one change that was particularly noticeable from E3 2019 to later versions of Animal Crossing: New Horizons is the grass design. The first version of the grass design is relatively plain with the traditional Animal Crossing triangle pattern only sprinkled in occasionally, rather than covering the whole grass area.

After a fair amount of feedback on this design at E3 2019, the Animal Crossing developers revealed a new design later that resembles the classic Animal Crossing grass look much more closely with the triangle shapes covering the area consistently.

Perhaps the best example of design changes comes from the winter season scenes with snow though! The grass triangles were entirely missing from snow at E3 2019 giving a sort of ‘blanket’ look to the snow landscape, but later versions returned the classic shapes.

To be clear, we’re using screenshot comparisons between E3 2019 and a later Nintendo Direct for simplicity — not the final release game, but the Direct screenshots are essentially a direct match to the final version.

Finally, it wouldn’t be possible to discuss the earliest version of Animal Crossing: New Horizons at E3 2019 without making mention of the infamous White Picket Fence! If you’re not already familiar, this white fence seen in the E3 screenshot above was never included in the final game after being one of the first fences we ever saw.

Although we don’t have much to show for Animal Crossing: New Horizons in terms of ‘beta’ screenshots from E3, as explained above, a couple early photos were shared by Nintendo at a developer conference after release that we can enjoy instead.

Fans of Animal Crossing: New Leaf will immediately notice many assets from that game were used in the New Horizons version above, presumably to speed up early concept development before the graphics were finalized. On the other hand though, the trees are quite similar to their look in the final game.

It would seem that creating dirt and stone pathways was a very early concept for Animal Crossing: New Horizons based on their presence in this version. And hilariously, that infamous white fence we just discussed earlier is present in this screenshot too, almost as some kind of sick joke.

And as a fun little quirk, you can actually spot Bob’s tail in the top right area by cobblestone… meaning there are multiple Bob villagers present on this island! Given that Bob was the first Animal Crossing villager ever created, it’s fitting that Nintendo would use the character as a test villager in early versions.

For more details of Animal Crossing: New Horizons’ development, check out our full article here covering what Nintendo shared at a Japanese developer conference, including some concept art!

We’re just a couple days away from Nintendo’s E3 2021 presentation happening on Tuesday, June 15th at 9AM Pacific Time / 12PM Eastern Time. Hopes are high for some sort of Animal Crossing news — whether that be a major update for New Horizons, a new amiibo series, or even a new spin-off game! Whatever happens, check back on Animal Crossing World for everything new that drops.