The 3 Strangest Animal Crossing E3 Announcements Over The Years 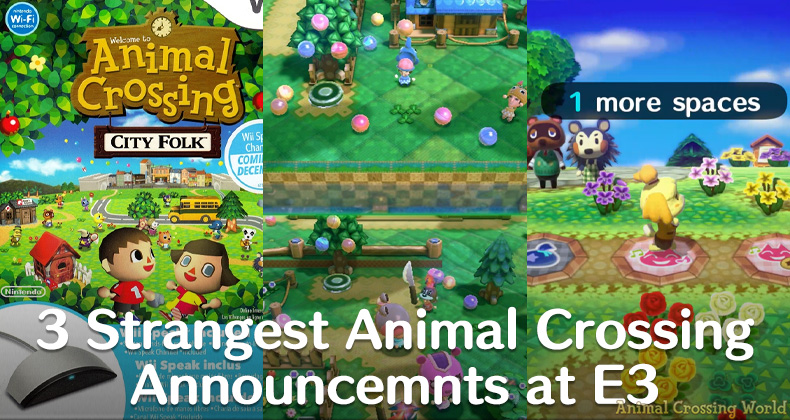 As we rapidly approach Nintendo’s E3 2021 Direct in just over a week, let’s look back at the strangest Animal Crossing announcements that E3 has brought us over the years!

Of course, there’s been plenty of exciting and expected reveals like Animal Crossing: New Horizons at E3 2019, but the Animal Crossing series has happened to see quite a few surprising and strange announcements worth recalling. We’ll cover three of the most interesting strange moments in this article!

With Animal Crossing: New Leaf set for release in the near future, Animal Crossing fans walked into E3 2012 greatly anticipating more news on the game, ideally with an exciting new trailer.

Sadly, the entire show went by without a word about Animal Crossing on 3DS almost as if the game didn’t even exist. But that didn’t mean Animal Crossing was missing as the franchise did pop up in a totally unexpected form within the Nintendo Land mini-game compilation for Wii U!

Known as Animal Crossing: Sweet Day, this Animal Crossing themed mini-game inside of Nintendo Land was one of the company’s early examples of the Wii U’s unique ‘asynchronous play’ concept.

Four players teamed up dressed as villagers working together to collect candy across the village, with the most lucrative candy coming from trees requiring teamwork to unlock. Collecting too much candy could slow down your movement though, so spreading it amongst the team was best.

Then the fifth player on the Wii U GamePad would act as the chasing player, like a game of Cops and Robbers, to hunt the villagers down using a pair of two controllable guards holding knives and forks.

Since the chasing player used the Wii U Gamepad’s screen, they were able to have their own special zoomed out camera view to see more of the map, without allowing the villagers to peek at the screen for hints.

Ultimately, the goal of Animal Crossing: Sweet Day was for the team of villagers to gather enough candy to win before the chasing player could knock out the villagers at least three times, and was generally a pretty chaotic party game with the villagers trying their best to outmaneuver the chaser.

Amusingly, the two guard characters were actually dressed up as the pair of police dog characters from past Animal Crossing games — Copper and Booker!

At the end of the day though, Animal Crossing: Sweet Day carries almost zero relation to the series other than borrowing some thematic concepts and the title. It doesn’t really look like an Animal Crossing game for the most part either as Sweet Day uses Nintendo Land’s unique art style.

Despite all that, Animal Crossing: Sweet Day was actually a pretty fun game if you could gather up a large enough group — it’s just not an Animal Crossing game and truly felt like it came out of nowhere. In hindsight, it was the beginning of many spin-offs that the Animal Crossing series would receive in later years.

At E3 2008, Nintendo announced the latest game in the series at the time, Animal Crossing: City Folk for Wii. That game would go on to be controversial with fans for a couple reasons, but that’s not our topic for today.

Alongside the announcement of City Folk, a brand new accessory was created and revealed at E3 by Nintendo for use with the game called the Wii Speak — a voice conferencing system you could connect to the Wii for voice chat online.

Rather than being a headset or headphones meant for one person to wear, the Wii Speak was what Nintendo called a ‘community microphone’ designed to pick up voices from the entire living room, so that entire rooms could communicate with each other.

Voice chat through Wii Speak was natively built into Animal Crossing: City Folk for the first time, so players could easily voice chat during multiplayer in their towns just by plugging in the Wii Speak and talking at their TV.

In fact, Nintendo even sold a special retail bundle of both Animal Crossing: City Folk and the Wii Speak system sold together to encourage its use. And if you played City Folk online back in 2008, voice chat with players really was quite common to encounter thanks to Wii Speak.

Given the relative little interest that Nintendo shows in offering voice chat these days, with the only voice communication for Animal Crossing: New Horizons hidden through the Nintendo Switch Online smartphone app, it’s quite strange looking back on the company creating an entire accessory just for voice chat in Animal Crossing!

While a few other third-party games did make use of the Wii Speak later, Animal Crossing: City Folk was the only Nintendo developed game to properly utilize the accessory.

Don’t lie — this one’s exactly what you expected when you clicked on the article. There’s no way we could possibly cover crazy announcements at E3 without mentioning the infamous Animal Crossing: Amiibo Festival!

For anyone somehow not familiar, Animal Crossing: Amiibo Festival was a party spin-off game released on the Wii U in 2015 primarily featuring a board game mode, alongside some other side activities.

While the game itself was viewed as disappointing and mediocre by many fans (read our review here), much of the bad rap Amiibo Festival gets also comes from the frustrating circumstances in which the game was announced at E3 2015.

Two full years after the release of Animal Crossing: New Leaf in 2013, fans were starting to get a little antsy about when the next mainline instalment would be announced for Nintendo’s latest Wii U console given that every system since the DS had featured Animal Crossing.

Adding to that excitement for the next game, a surprising leak was found on Nintendo’s servers days before E3 2015, including images of brand new Amiibo figures for Isabelle, Tom Nook, Mabel, and K.K. Slider.

At the time, Nintendo was all-in on Amiibo releasing with almost every new game, so speculation quickly led to the possibility of Animal Crossing for Wii U finally being announced at E3 days later with amiibo. I truly believed it was happening too!

Making matters even worse, the opening to Amiibo Festival’s E3 2015 trailer displayed a beautiful HD rendition of Animal Crossing: New Leaf’s train station as fans grew excited for a brief moment about the Animal Crossing game they had been waiting for… just as the camera began to pan down towards a row of board game spaces.

So although Animal Crossing: Amiibo Festival was a strange and disappointing game in itself, the odd circumstances of the announcement at E3 2015 were arguably the worst part of it all and are worth remembering for history. I certainly won’t ever forget that reveal!

That covers our three strangest Animal Crossing announcements from E3 over the years. I hope you either learned something about Animal Crossing you didn’t know, or relished some old time memories from the olden days of Nintendo’s E3 shows!