Damaged & Corrupted Save Data, Can You Use Cloud Backup?

Damaged or corrupted save data is unfortunately an error that you can encounter when playing Animal Crossing: New Horizons. Learn everything we know about this problem and what you can do about it in this guide.

This dreaded error occurs when you load up your copy of Animal Crossing: New Horizons and the game detects that your save data has been either corrupted or damaged somehow.

When this happens, the Nintendo Switch is unable to properly load up your save blocking you from playing as usual. Specifically, the following error text is displayed with two button options to proceed: “The save data is damaged. Would you like to delete the damaged save data and start the game over?”

If you press the Start Over button, your existing damaged or corrupted save data for Animal Crossing: New Horizons will be deleted, so that you can begin a new game from scratch. Your previous island and character will be gone.

If you press the No button, your save data for Animal Crossing: New Horizons will remain on the system. However, since the data is damaged, you won’t be able to load up your island and play as normal.

How To Fix Corrupted & Damaged Save Data

If you’re playing with a digital copy of Animal Crossing: New Horizons and your save data is corrupted or damaged, our main recommendation is to try deleting/uninstalling the game from your Nintendo Switch and re-downloading/re-installing afterwards.

We’ve seen a couple different reports online from players who managed to resolve the save error and retrieve their original island by doing this. Here’s an example from Reddit:

My brother’s save file just got corrupted after updating to 1.2.0.

Is there anything he can do to get his save file back??

EDIT: He got his save file back!! Literally he just deleted the game and reinstalled. Weird. Anyway, I guess I’ll leave this up incase anyone gets this issue as well!
— u/squidc00kie on Reddit

We won’t waste your time here with any other futile solutions though — the real honest answer is that there are very few things you can do to fix or resolve this error besides restarting your Animal Crossing: New Horizons game. No other reliable save data recovery method exists as far as we know.

If you want to exhaust all of your possible options though, you can contact Nintendo of America support here, or your other local regional Nintendo company for help. We haven’t heard of anyone successfully having Nintendo restore or fix their corrupted and damaged save data for Animal Crossing: New Horizons though.

You can also try following Nintendo of America’s basic resolution steps here for dealing with corrupted save data, but we doubt that these suggestions will make any difference and you’ve likely already tried them yourself first.

I know all of this really sucks to hear and I’m so sorry about the loss of your island. As the author of this guide, I’m obviously not responsible for any errors, but I know how much time, effort, and love people put into their Animal Crossing islands. It can be truly heartbreaking and I wish there was a better solution.

Of course, if you do have any luck or success with a recovery method of any kind, please let us know in the comments below so we can improve this guide and help other players out!

Unfortunately, it’s not possible to use the Save Data Cloud backup feature as part of Nintendo Switch Online to restore or recover your Animal Crossing: New Horizons save at this time. While this feature can be super helpful for most other Nintendo Switch games, Nintendo has sadly chosen to disable cloud backup functionality for Animal Crossing: New Horizons. 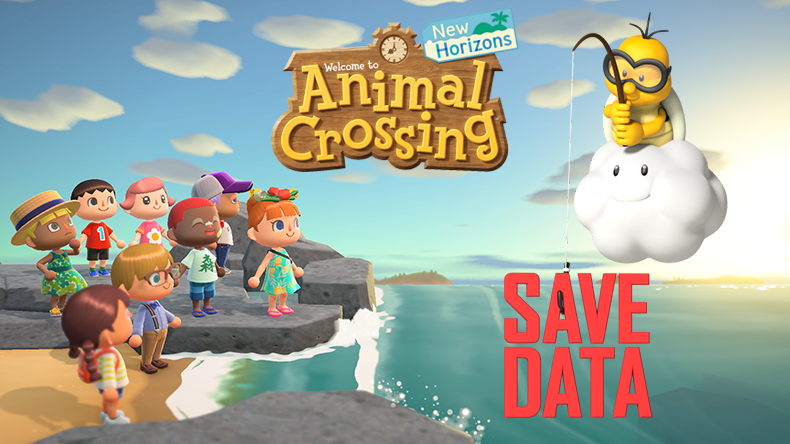 There’s a number of possible reasons for this decision, including fears of item duplication and other cheating or issues with the way that the game handles multiple players on a single save file. Regardless, it’s simply not possible to recover your save data for Animal Crossing: New Horizons right now by using cloud saves.

On the bright side, Nintendo has announced previously that some form of the Save Data Cloud Backup will be coming to Animal Crossing: New Horizons as part of a future update soon. Specifically, it was announced in the February 20th Nintendo Direct that this functionality would be made available “sometime after launch”.

Additionally, we expect that there will be some limitations associated with the feature when it eventually arrives as Nintendo has signaled this functionality will developed specifically for Animal Crossing: New Horizons and remain separately from the regular Save Data Cloud Backup.

Specifically, Nintendo has stated this feature will introduce “a limited ability to recover Animal Crossing: New Horizons save data from the server in the event of system failure, loss or theft”. So it’s clearly intended for specific circumstances like when you encounter corrupted save data or lose your Nintendo Switch — not for random save transfers on a whim whenever you feel like it.

In fact, the original version of the February 20th Nintendo Direct actually stated in a footnote at the bottom of the screen that “Nintendo Switch Online members can only have save data recovered one time due to the loss or damage of system”, which would be a pretty strict limitation.

However, this footnote was removed by Nintendo a few days later in a re-upload of the Direct presentation and replaced by the vague language that more information on save data recovery at a later date. So we’ll just have to wait and see as to whether this strict restriction will come true, or was simply jumping the gun.

How To Prevent Corrupted & Damaged Save Data

The main way you can prevent any corruption, damage, or other errors to your Animal Crossing: New Horizons save data is to simply follow the instructions from Nintendo in-game.

Never turn off your Nintendo Switch system while the game is saving, including both when you manually save to end your game, and when the game is auto-saving in the background as seen with a rotating circle icon in the top right of the screen.

Furthermore, according to some users online, using the Minus Button shortcut to leave an island online can increase the chances of save data damage or corruption errors. In contrast, using the regular menu to leave by speaking with Orville at the Airport is considered ‘safe’.

In our opinion though, these are largely unfounded rumors with little basis in concrete facts. There’s very little logical or programmatic reason to believe that the saving process for leaving via the Minus Button would be any different than leaving via the Airport desk.

We can personally say that we’ve left online islands using the Minus Button probably over a hundred times without any save issues at all, and so have many of our personal friends doing so using the same function. It’s unlikely there is any real correlation between the two.

That being said, if you are very concerned about potentially losing your save data and wish to take as many precautions as possible, then it may be wise to avoid using the Minus Button to leave islands and avoid playing with others who do use it. It certainly can’t hurt to be careful at least.

But how does Animal Crossing: New Horizons save data become damaged or corrupted in any other way then? General save corruption issues can potentially occur with almost any video game, not just this one.

Due to the extreme popularity of this particular game combined with how protective players can be given the hundreds of hours they may invest, it’s understandable that we may hear about more save errors. With over 13 million copies of Animal Crossing: New Horizons sold so far, even a tiny 0.05% of users error rate would result in over 65,000 players experiencing problems.