The New Year’s Eve Countdown is a holiday event in Animal Crossing: New Horizons (ACNH) held on December 31st celebrating the beginning of a brand new year with fun activities and exclusive items to unlock! Learn everything you can do on New Year’s Eve and all of the items you can get in this guide.

The New Year’s Eve Countdown event is held in Animal Crossing: New Horizons on December 31st every year! You’ll find the event decorations ready at Resident Services beginning at 5AM when the day begins, but the celebration comes into full swing in the evening at 11PM.

Unlike most of Animal Crossing’s holiday events, the New Year’s Eve Countdown does not require any updates or version letters to be unlocked since it was included in the launch version of the game. You can freely time travel to it in advance as well.

You’ll know the New Year’s Eve Countdown event has begun on your island when Isabelle wears a New Year’s Hat during her morning announcements, and if it’s after 11PM, the holiday music has started to play!

New Year’s Eve Event Activities — What To Do

When the New Year’s Eve Event begins in Animal Crossing: New Horizons, you can find a celebratory setup with Isabelle and Tom Nook outside Resident Services! We’ve summarized the main activity flow for this event below, with more details on each part later in this complete guide.

In a rare appearance, you’ll find both Isabelle and Tom Nook relaxing outside Resident Services in formal outfits to celebrate the New Year’s Eve Countdown event! They’ve set up the plaza with plenty of decorations for the yearly celebration including a giant countdown sign, balloons, stalls, banners, and more.

But since both of the building’s occupants are outside, Resident Services is closed for the entirety of New Year’s Eve on December 31st removing access to the following features:

Don’t worry about your daily Nook Stop check-in streak for Nook Miles though — the skipped day will be fully accounted for with an additional bonus provided to you as well!

Be sure to speak with both Isabelle and Tom Nook outside of Resident Services at any time during the New Year’s Eve event in Animal Crossing: New Horizons to get two different free items.

Isabelle will share the Light Stick item with you that can be equipped and used to wave in the air with your arms. During the final countdown near Midnight, your villagers will make a similar motion with their own light sticks and you can play along using this item!

Tom Nook can give you a free stack of 5 Party Poppers, an equip-able item that can be fired off into the air creating confetti! These five are on the house, but additional Party Poppers can be purchased in packs of five from Tom Nook during New Year’s Eve for just 300 Bells.

During the New Year’s Eve event, you can purchase special holiday hats from Tom Nook’s stand next to the countdown sign. These hats are only available for this one day every year and cost 500 Bells each.

Exactly which type of New Year’s Hat is available from Tom Nook in each year appears to be unique per island though, so you may be able to find the opposite type on another player’s island in the same year!

Each type of New Year’s Hat comes in eight different possible color variations with available styles including Blue, Green, Light Blue, Orange, Pink, Purple, Red, and Yellow. However, only four of these colors will be sold during your island’s event — try visiting other islands to get the rest!

Check out both the New Year’s Hat and New Year’s Silk Hat available on New Year’s Eve in Animal Crossing: New Horizons with all variations below: 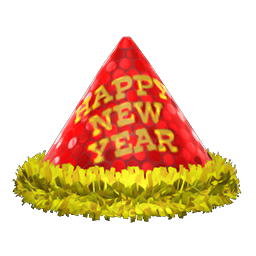 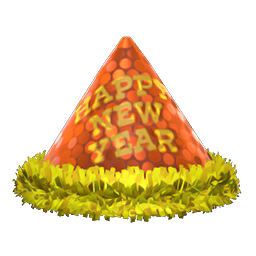 Note that when speaking to Tom Nook, the color option that he calls ‘Aqua’ is actually called the ‘Light Blue’ variation when browsing your Nook Shopping catalog. There is a mismatch in the game between the two names.

When the end of the day draws near and the midnight hour approaches, you’ll want to show up at Resident Services in preparation for the big moment!

Specifically at 11PM, the New Year’s Eve event will properly begin as your island’s music changes to a special countdown theme, alongside some of your villagers beginning to crowd around the plaza excited to talk about the new year. And as the minutes to continue to tick by, you’ll feel the music change and amp up all the way until 5 minutes before the New Year!

Finally, when there’s just one minute left on the countdown, you’ll hear the clock begin to count down the seconds as your villagers approach the sign with their light sticks in the air. Use your own Light Stick from Isabelle by pressing A to join in the fun with them as you countdown the last remaining seconds of the year!

When the clock strikes Midnight on January 1st in Animal Crossing: New Horizons, fireworks will begin to fire off above your island, including some that spell out the New Year in numbers across the sky! You can enjoy the celebrations of the New Year with fireworks continuing all the way until 2AM.

While it’s not directly part of the actual New Year’s Eve Countdown event on your island, you should make sure to check out the Seasonal tab in Nook Shopping for a chance to order up to 11 more New Year’s holiday items!

Note that some New Year’s items are dependant on the current in-game year. We’ve included the three most relevant Zodiac Figurine items in the list above, but you can find a complete list of figurines and dates in our complete article here.

You can normally access Nook Shopping by interacting with the Nook Stop Terminal inside of Resident Services, but that option will be unavailable on December 31st. Instead, you can use your NookPhone’s Nook Shopping app if you’ve ordered at least 100 items previously and unlocked the app.