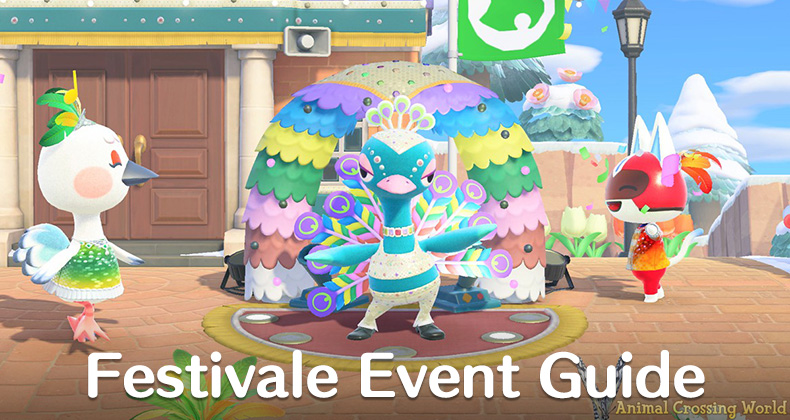 Festivale with Pavé is a holiday event in Animal Crossing: New Horizons (ACNH) on February 15th featuring confetti and feathers! Learn all of the Festivale event activities and rewards in this guide.

This event is a new feature introduced in the Version 1.7 January Update for Animal Crossing: New Horizons and requires a fully updated game to experience. Learn more about everything in the update here.

The Festivale event with Pavé is held in Animal Crossing: New Horizons on February 15th, 2021 beginning at 5AM and runs for a full 24 hours until 5AM the next day on February 16th. This date changes depending on the year, but you can only play in 2021 currently.

Make sure you’re connected to the internet with your user linked to a Nintendo Account in order to unlock Version 1.7.0a with Festivale. Find complete unlocking instructions here.

The Festivale event is held on the same date for islands in both the Northern Hemisphere and Southern Hemisphere. Note that the upgraded Resident Services with Isabelle must be unlocked to fully experience the entire event.

You’ll know the Festivale event has begun on your island when Isabelle wears a green Festivale hat during her morning announcements and you can hear special carnival themed music start to play replacing the usual hourly theme!

Festivale Event Activities — What To Do

Once the Festivale Event begins in Animal Crossing: New Horizons, you can find a fabulous peacock named Pavé on your island at Resident Services waiting to greet you! We’ve summarized the main activity flow for this event below, with more details on each part later in this complete guide.

Learn more about all of the fun Festivale activities you can enjoy during this event in the sections below, including specific details on how to get every item reward available in this event.

To begin the Festivale event, head over to Resident Services and find Pavé the Peacock dancing underneath his arch in the plaza! He’ll introduce himself as an extraordinary dancer here to open your mind to the spirit of Festivale.

When meeting Pavé for the first time, he’ll teach you the DIY crafting recipe for creating Rainbow Feathers. This will allow you to craft a Rainbow Feather using 1 Red Feather, 1 Blue Feather, 1 Green Feather, and 1 Purple Feather together!

Similarly to seasonal items like Snowflakes, you can catch these wonderful feathers on Festivale by using your Net and swinging at them. Feathers also make a ‘whoosh’ sound effect when they are in the air near you, which can help you find them behind trees and other obstuctions.

While the Red, Blue, Green, and Purple feathers are all equally rare, the Rainbow Feathers are particularly rare and valuable. Be sure to catch them whenever you see one as you might regret it later! After that, you should focus on feathers of the color you would prefer to obtain Festivale Set furniture in as the color determines your reward.

Another way you can get feathers during Festivale is by trading with the villagers on your island! Simply talk to a villager while carrying feathers in your inventory and they may propose a trade.

In particular, villagers seem to seek out the feather color that matches their current Festivale clothing. For example, if you spot Roald wearing a blue outfit, then he will suggest trading one of your Blue Feathers for another color.

It’s worth noting that if you’re carrying a stack of say, three feathers, then villagers will trade you back a matching stack of three in another color.

Unlike past Animal Crossing games, you won’t need to win any sort of minigame like Rock Paper Scissors to complete a villager feather trade.

Don’t forget that you can craft Rainbow Feathers as well by using the DIY crafting recipe provided by Pavé when you first meet him. With this recipe, one of each Feather color (Red, Blue, Green, Purple) can be combined together to craft a Rainbow Feather!

After catching some floating feathers around your island during Festivale, you can talk to Pavé at Resident Services and trade your precious feathers to him for Festivale Set furniture items! This can be done one at a time, or you can save up all your feathers until the end.

To get a piece of Festivale furniture, you’ll need to give Pavé 3 of the regular colored feathers including Red Feathers, Blue Feathers, Green Feathers, or Purple Feathers. Alternatively, you can trade a single Rainbow Feather to him instead.

Importantly, the feather color you trade will determine the style of the furniture that Pavé gives you. For example, if you trade 3 Red Feathers to Pavé, you will receive a red colored piece of Festivale Set furniture back. Or if you give him a Rainbow Feather, expect to get a rainbow styled Festivale item in return.

It’s also worth noting that when giving Pavé 3 of the same colored feathers, they must be ‘stacked’ together in a single inventory slot. If your feathers are spread apart and not in a single stack of 3, Pavé will not accept them.

After obtaining the first nine Festivale Set furniture items by trading nine different times, Pavé will inform you of the ‘ultimate Festivale reward’ available in exchange for three Rainbow Feathers!

You can either find 3 Rainbow Feathers floating in the air around your island, use the Rainbow Feather DIY crafting recipe with 3 of each feather color, or ideally a mixture of these two methods.

When you have all three Rainbow Feathers required, talk to Pavé again to unleash his greatest Viva Festivale dance yet and he will give you the exclusive Festivale Float furniture item! Unfortunately, the Festivale Float does not come in multiple different color variants like the rest of the Festivale Set.

Want multiple of the Festivale Float? You can get duplicates of this item by cycling through the entire event a second time. Just trade regular colored feathers to Pavé another nine times to get all of the normal furniture items again, then 3 Rainbow Feathers to unlock another Festivale Float.

There are 10 different themed rewards to unlock and obtain in the Festivale Event for Animal Crossing: New Horizons! Find a complete list below of each item and how to get it, including interactive checkboxes for tracking your progress.

For more detailed information on how to get each Festivale item, read the Trade Festivale Feathers To Pavé For Prizes section above. All of the items shown above come in five different color variants, except for the Festivale Float.

After obtaining all of Festivale Set items from Pavé, including the ultimate Festivale Float reward, you might want to keep playing and hunting down feathers for a little longer. That’s because Rainbow Feathers can be used to customize the furniture items you just earned at any DIY Workbench!

There’s no way to get feathers outside of the Festivale Event on February 15th, so unless you time travel backwards or trade with other players, this could be your only chance to get your hands on the Rainbow Feathers you want for customizing items.

Remember that you can easily craft a Rainbow Feather by using one of each regular colored feather thanks to the DIY recipe given by Pavé — you don’t necessarily need to actually find that many Rainbow Feathers on their own.

To celebrate the Festivale event, three new pieces of themed Festivale Clothing can be purchased at Able Sisters and a set of four new Festivale Reactions can be picked up at Nook’s Cranny.

These items are no different from what was already made available starting on February 1st in the run-up to the event, but you can still grab them on February 15th if you haven’t already!

This guide is a work in progress as we explore the Festivale event. Please leave a comment below if you spot any errors, or have a suggestion to add to the guide.